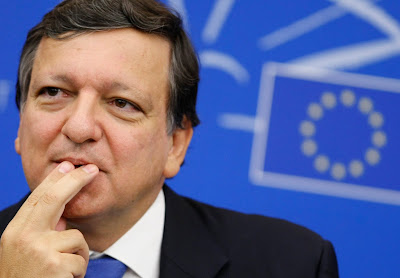 Do you think I exaggerate?  Do you think my language is too alarmist? Judge for yourself.  Here is what the man said:

"We need to complete our monetary union with an economic union. It was an illusion to think that we could have a common currency and a single market with national approaches to economic and budgetary policy."

The European Commission (or a related institution) will start to issue bonds:

"Once the euro area is fully equipped with the instruments necessary to ensure both integration and discipline, the issuance of joint debt will be seen as a natural and advantageous step for all."

"The Commission will present options for (such) "Stability Bonds" in the coming weeks. Some of these options can be implemented within the current (EU) Treaty, whereas fully fledged 'euro bonds' would require Treaty change."

The Commission will surpress credit rating agencies and take over responsibility for bank resolution.

"The Commission will deliver .... proposals by the end of this year, namely rules on credit rating agencies, bank resolution, on personal responsibility of financial operatives."

The Commission will regulate derivatives and pay for bankers.

"Wehave already tabled 29 pieces of legislation. You have already adopted several of them, including the creation of independent supervising authorities, which are already working. Now it is important to approve our proposals for new rules on:derivatives; naked short selling and credit default swaps; fair remuneration for bankers."

"Today, the Commission adopted a proposal for the Financial Transaction Tax."

The Commission will determine tax policy (This is a cleverly worded request couched in terms of negotiating treaties with third parties. However, how can the Commission negotiate while tax policy within the Union varies across countries? It can't unless it takes the lead in harmonising tax policy.)

"We cannot afford to turn a blind eye to tax evaders. So it is time to adopt our proposals on savings tax within the European Union. And I call on the Member States to finally give the Commission the mandate we have asked for to negotiate tax agreements for the whole European Union with third countries."

The European Commission takes over responsibility for foreign policy. (A suble play on words; what exactly is the euro area? I don't think he meant the eurozone.):

"It is also time to have unified external representation of the euro area."

Taken together, Barroso proposals amount to a complete takeover of EU fiscal policy and financial markets.

Can he be stopped? Barroso had a warning for those who oppose the centralizing meglomania of the European Commission:

"The pace of our joint endeavor cannot be dictated by the slowest. A member state has the right not to move. But not the right to block the moves of others. Our willingness to envisage Treaty change will reinforce the credibility of our decisions now."

It's amusing to see how their list of steps required to handle the crisis is exactly the same as the list of things they wanted before the crisis.

Never trust a man with a toupee

The question is always a) where is your personal line-in-the-sand and b) what can you do about it.

Most people fail at b)

As usual, an insightful and well argued case which many will agree with - but I have the feeling its wishful thinking that anyone can stop another Holy Roman Empire / Napoleonic Empire / Fourth Reich etc.

Some people find it really effective, but yes, these are just what have been planned already.

Agreed, I didn't realise you were anti-EU.

What else would one expect from a Maoist?

It's all very sinister.

John Redwood keeps telling me that our people consistently voted for pro EU governments and so there's not a lot can be done.

I've taken issue with him over it. Politics is bundled up with issues as bad as any toxic debt.

This one we need to separate out - fast.

@electro-kevin - nice article - thanks!
Things have changed (just a tad or 2) from my days..