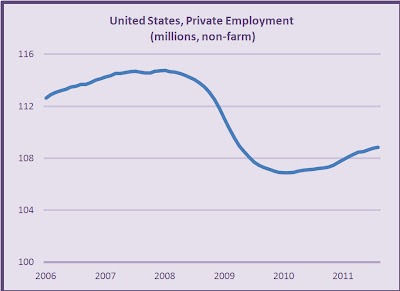 There is an apocryphal story that in the summer of 2006, the US Federal Reserve became worried about the property bubble that was raging in many US cities.

So the Fed dusted off its macroeconomic models and conducted a simulation to see how the US economy would respond to a 20 percent fall in house prices. The model predicted that the US economy could easily absorb that kind of correction and that there would be no major impact on output or employment.


June 2006 was about the time that the housing market peaked in America. Throughout the summer it started to weaken slightly with prices beginning to fall 2007. The immediate impact on employment was, as the model projected, minimal. Employment continued to grow throughout 2007 reaching a peak in January 2008.

Thereafter, it was as if the US labour market had been hit by a meteor. Within two years, almost 8 million jobs disappeared. The post-housing bubble recession eliminated 1 private sector job in 14.

So what is the moral of the story?

Well, there are perhaps too many to enumerate. The obvious ones are the poor predictive power of economic models, the complacency of economists, and their inability to understand the interactions between financial markets and the real sector. Poor bank supervision, perverse incentives in financial institutions, and self-destructive financial engineering would be another three to add to the list. Bonuses, speculation, greed, corporate stupidity, declining moral values, the masculine inadequacies of Bill Clinton, the arrogance of Alan Greenspan and the war-like tendencies of the Bush family - I could go on......

However, the really big lesson is that asset bubbles hide the underlying weaknesses of economies. For at least a decade, the US was losing a battle over competitiveness with Asia. Manufacturing jobs were moving eastwards, and America was de-industrializing. The story is equally true for the UK and much of Europe.