Greece; a country on the edge of a nervous breakdown 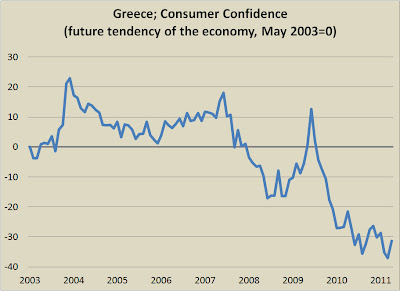 Greece is  only days away from national humiliation. The Greek government will admit what we all already know-that it can no longer service its debt. It will ask its creditors to restructure and write down government liabilities to more manageable levels.

Understandably, the Greek people have become deeply pessimistic about the future. This is reflected in the latest consumer sentiment surveys. Sentiment has fallen off a cliff, and Greeks are on the edge of a collective nervous breakdown.

Nevertheless, it is wrong to think that Greece is an outlier. It is not a special case. It is not unique. The Greek government made the same mistakes that other European countries made.

The Greeks allowed the state to grow to the point where it completely dominated economy. In parallel, Greeks created a welfare system that reduced incentives to work and take risks.

Even sectors that were notionally private, such as construction, were beholden to public officials through a complicated and obscure system of state procurement. The state was the omnipresent funnel for corruption, both on a great scale and on the most pettiest of levels.

The Greek people, for the most part, wanted a bloated welfare state, where no one paid for anything. They liked generous pensions, early retirement, and free healthcare. Greeks learned to adapt to the daily indignities that the state inflicted upon them. They bribed and scammed their way around the incomprehensible morass of rules and regulations.

Perhaps understandably, the Greeks did not want to pay for their deeply dysfunctional public sector. Tax evasion became the national hobby. When the government could not balance tax revenues with expenditures, it borrowed from the bond market. There were plenty of willing banks ready to accommodate Greek fiscal imbalances.

The Greeks had an answer for the economic dislocation caused by the adoption of the Euro. Rapid credit growth to the private sector created an asset bubble, which spawned a huge service sector centred on the financial market. What it could not produce at home, it purchased from abroad. Greece ran up a huge current account deficit, which is financed with cheap loans from northern Europe.

This bizarre economic model continued so long as Eurozone interest rates remain low, and and no one paid too much attention to the health of the financial system.

Four years ago it all came crashing down. The flows of cheap capital stopped, the government could not finance its deficits, asset bubbles suddenly collapsed, and all the weaknesses of the Greek economy became horribly exposed.

Does any of this sound familiar?

Thank you, Alice. The first clear exposition of the situation that I have read. Even I can understand it.

Wonderful work! This is the type of information that should be shared around the internet. Shame on the search engines for not positioning this post higher! Come on over and visit my site . Thanks =)

Alice, couldn't be said better. You have surpassed renowned economists and journalists with your simple explanations. The only thing I disagree is the adoption of euro. This was not part of the demise of Greece, but rather the slyness of greek people who abused the euro in order to gain more. For instance a kg of bread cost 20 euro-cents (50 drachmas) before Greece entered the euro-zone, and 50 euro-cents (160 drachmas) immediately after. Therefore it's not the euro itself that causes problems, but rather the stupidity of greek people who didn't know how to handle the transition from a valueless scurrency (drachma) to a valueably one (euro).

I'll probably quote you on this if I may, Alice.

And yes. It does all sound familiar.