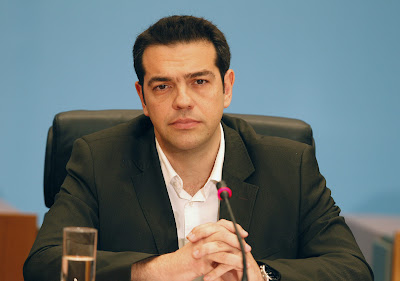 Say hello to Alexis Tsipras, president of the Greek Synaspismos political party and head of Coalition of the Radical Left (SYRIZA) parliamentary group.

Who are Syriza? Here is a list of the parties that belong to the group along with a quick summary of their political positions. The list comes from Wikipedia (so it must be true):

Yesterday, the Greek President asked Tsipras to form a government. That alone should tell you something about the nature of the political crisis now facing Greece.

I imagine that asking Tsipras to form a government would be something similar to asking George Galloway to Buckingham palance and giving him the keys to Number 10.

What would it be like, I wonder, to live under a Respect administration headed by Gorgeous George and his mates? I never had to think about it before. It was just too absurd. Now, that terrible vista can no longer be ruled out. If spineless Euro-capitulationists brought Greece to utter ruin, their cousins in Britain can do the same.

Galloway as PM. The horror....

It would be enough to drive you to drink. Which would be banned under his new laws.

I think the people and things with normal, safe-sounding names are pretty scary as it is right now.

Whenever I hear the term "central banker" I brace myself for what will follow. Same with "confidence in banks", "supply-side economics", "mortgage", "neo-liberal", "Merkozy", etc. The list is endless. When I hear the word "securitisation" I get a mental image of Earth breaking away from its present orbit and taking a stroll through the asteroid belt. Who knew the 2012 Mayan apocalypse would be brought on by debt and bailouts?

After Blairites and Thatcherites I'm supposed to fret about Maoists? Bring it. I could do with a fresh hell to keep things lively.

The electorate, like a jury, are never wrong. Are the Greeks to get Irish style ballots foisted upon them? Keep on voting 'til you get the answer the EU wants?

They have to choose their own path, right or wrong, regardless of what anyone else thinks.

Droog is quite right - it's the Central Bankers who are fully responsible (together with the euro fanatics) for the emergence of extremism.Until sanity is returned to the running of economic policy this will get worse

Disaster for Greece (but they brought it on themselves), nightmare for "Europe" (read "the EU"), last remaining hope for us.

I'm waiting with bated breath for the whole ghastly thing to collapse in ruins.

The Champagne's on ice.

Leave the Euro, hotels charge 1000 drachma a week for a room at an exchange rate of 10 drachma to the Euro, 60 million Germans descend on Greece for 4 weeks...

Bugger, forgot he income from sale of sunbeds and towels...

Greece then buys out Spain.

It's interesting that the Chinese have just UPGRADED Greece's credit rating:

Do they have a cunning little plan?

I found this on the Motley Fool website and thought it worth wider circulation:

"I administer a closed defined benefit scheme. ...I have one member reaching NRD this year and calculated his benefits today.

His pension payable from NRD including revaluation is a wopping £1,089 pa.