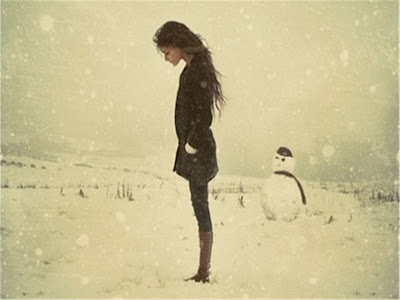 Judging by the headlines from the Guardian and the Independent, isolation seems to be the word of the moment. I woke up to alarming reports that Britain is now cut adrift from Europe, destined to walk this cursed earth alone and friendless. While the 26 other members of the Union happily huddle around the warm fire of fiscal union, Britain freezes on the icy tundra.

We are about to discover the dismal depths of international loneliness. As Russell Crowe might say "Europe is the light; and Britain is the darkness". When we vetoed a new EU treaty, we were cast out, driven from the community of respectable countries. We are ostracised; boycotted and shunned. By a diktat from Germany and France, Britain will henceforth be unwelcome; expelled from the European family. We are excommunicated and damned. Throughout the continent of Europe, Britain is the unmentionable name;"I know not of that place",  the chorus will shout.

Our crime was a grievous one. We callously pursued our own selfish national interest rather than focus on the noble fraternal aspirations of Germany and France. Pride and arrogance blinded us to the necessity of submitting our budgetary policies to the European Commission for approval. The nation was gripped in a collective madness. We had this insane idea that we could determine our expenditure and taxation policies. Leftists and Europhiles here in London have promised us grim retribution for our defiance.

We will quickly learn the error of our ways. To be outside the Euro-federalist circle can mean only one thing - grinding and relentless poverty; just ask Norway, Switzerland, Canada, Australia or New Zealand. In the fullness of time, we will knock on the door and ask for admission into the new European structures. Like a shivering child, who ignored the wise admonition of a loving parent, we will ask for forgiveness.

So, Mr. Cameron enjoy your moment of popularity, the Lib-Dems, Guardian journalists, and other unsavory characters want you back on a plane to Brussels to undo the calamitous veto that you so brazenly waved about this week.Thankfully, the European Commission is a patient overload. So long as we are prepared to bend our knees and swear obedience, we can again return to sit by the fireside of European federalism.

I really hope his game is to get us thrown out. There's no other way to leave.

Oh well, as long as they're sure that's a warm fire they're huddling around, and not a firey abyss.

How long before some of the 26 start peeling away, as Parliaments or plebiscites start saying "no"?

If I were Irish, for example, my answer in any EU referendum, whatever the question, however phrased, would be a resolute "Fuck off".

Insulation, not isolation. The Euro problem was not resolved.

Paddy Power has odds of 4/6 for the thing to collapse by next year - and 2/9 by 2015.Must be lots of people betting real money on those outcomes .

Do these Lefties have no brains? Has it not occurred to then the practical reality of what the other 26 nations are signing up to? Do they not realise than they could be in a situation come 2015 when they've just won an election on a platform of more spending and the EU says 'Nein' to their democratically approved plans?

Much as I dislike tax and spend polices, I would prefer for our nation to be able to choose them if it so desires. It will have to suffer the consequences of its choices (as we are now) but that is democracy.

What the 26 nations are signing up to is an oligarchy.

It is a measure of the Left that they can hate one thing so much (the Tories) that they will support ANYONE who is against them. My enemies enemy etc. Just like the Leftist support for Iran, because they hate Israel.

"Feck off" I think. Witness the sign we saw at a petrol station in West Cork, this summer, which read

To the point, you would have to say

I guess "Vodka drinker" got his/her answer to your previous "hero" post.

Oh we can still do our part, there are some othe Italian Gilts (BTP) to buy next year. 7%, it seems a good deal, isn't it?

Could we be heading for a (perhaps loose) Tory/UKIP coalition at the next General Election?

I ready today that a collapse of the Euro is likely to hit the UK hard in terms of payouts relating to CDS.

BTW. Is that a picture of you Alice?