How long can the Guardian survive? 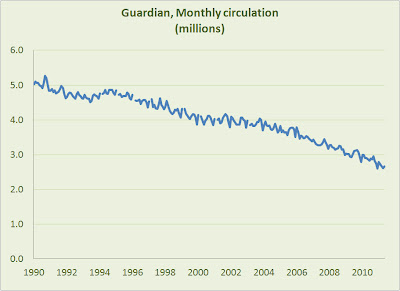 The Guardian is bleeding money and it isn't hard to see why. Its readership has more or less halved since 1994. Back then, it could count on a circulation of about five million. Today, it is around 2.5 million. There is a clear trend in their circulation, and if it continues, their numbers could hit zero in a little over ten years.

Print journalism is so 20th century. The paper often boasts of its very modern and massive online presence. In revenue terms, that puts the Guardian on more or less the same level as a blog. Online content doesn't generate cash, but it is costly to produce, that is, unless you are a blogger like me and willing to write for free.

The Guardian has another more immediate problem; it has always generated large revenues from its jobs pages. It has a virtual monopoly on public sector job adverts. Some unkind souls might even describe this revenue source as an implicit government subsidy, but let us not delve too deeply into that contentious and unproven accusation.

However it might be characterised, it is a revenue item that can go only one way; downward. Fiscal austerity means public sector downsizing.  Fewer government jobs means no job ads and zero revenues for the Guardian. Fiscal consolidation is very bad news for the Guardian.

Understandably, the paper has been campaigning strongly against those cruel government cuts. What was the phrase they used this week? Ah yes, fiscal barbarism. The metaphor works for me; I can see fiscal austerity as a hairy Barbarian, welding an nasty looking axe, and chopping the Guardian up into tiny little bits.

The decline doesn't look linear. 1998-2003 - circulation was flat. The crash comes from 2003 onwards and the decline is rapid. Their circulation is in more trouble than your piccy suggests.

This is true of all UK newspapers.

Government job ads should be online. That would save the taxpayers a lot of money in advertising costs.

I thought that GMG was losing money, despite their completely above board tax arrangements.

It's rather like watching someone you detest die very slowly. From that point of view, it's immensely satisfying, but I hope that they go under before the next general election.

Should Labour win it, they'd revive their propaganda apparatus at once.

Virtually everyone with any power in this country.

For goodness sakes. How can anyone take Polly Toynbee seriously ?

The Tories were supposed to cut off the public sector vacancy lifeline to the Guardian. Just one more promise they've reneged on. Quelle fcuking surprise!

Pardoxically, I think that one of the Guardian's biggest problems is one of the insitutions which the paper and its readers champion - the BBC.

If the Guardian aims to be a voice of the centre-left then it is operating in the same space as the BBC. While it is true that the BBC doesn't offer as many comment pieces their view of the world is essentially the same. You only have a chance of getting people to pay for something that the BBC doesn't provide for free.

I agree with the general argument - The guardian and most newspapers are doomed under their current business model.

I also love this blog

Although I don't recognise any of the numbers quoted. Guardian has a daily circulation of just under 250k. A circlation of 2.5m would make it spectacularly profitable.
http://www.pressgazette.co.uk/story.asp?sectioncode=1&storycode=47846&c=1

And a daily readership of just over 1.1m
http://www.guardian.co.uk/advertising/guardian-circulation-readership-statistics