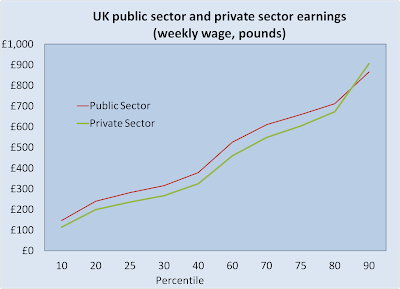 A couple of warnings here.  First, we aren't comparing similar occupations.  The lower end of the public sector might cover highly trained graduates, whereas the private sector could include highly competent management trainees at McDonalds.  Second, the private sector is signficantly larger and more heterogeneous than the public sector, despite New Labour's best efforts.

Still, the chart tells us something.

Bung in their accruing pension rights and how does it look?

And I invite you to have a look at this Ros Altmann piece, revealing a well-hidden public sector pay subsidy that I'd never heard of before.
http://www.rosaltmann.com/hutton_press_release_contract_out_2aug10.htm

and
Dustmen for example.
I have family that do cleaning for a school, employed by the council.
There are plenty of those kind of jobs in the public sector as well.