The UK housing bubble - I shall expose the guilty 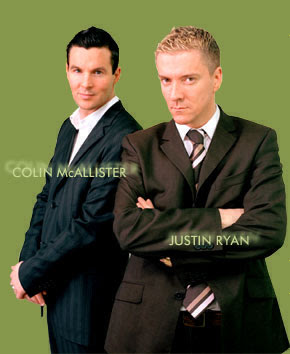 On the eve of the greatest housing crash in UK history, I have set myself a task. I will expose those individuals and organisations that generated this real estate frenzy. No one will be spared. The guilty shall be named, and shamed.

Today, we start with Justin Ryan and Colin McAllister. What is the indictment? It is that their ridiculous TV programme "Million Pound Property Experiment" inspired a generation of would-be small time property developers.

The show first aired on BBC 2 during 2003-4. It was a pernicious idea; take out a £100,000 loan from the BBC and then transform it into a million pound profit from buying, renovating and selling properties. Of course, Justin and Colin tarted up this concept with charity - any profits would go to the BBC's "Children in Need" campaign.

What pearls of wisdom did the programme offer? Find areas on the up, buy the shabbiest house in the best street, find out what kind of people buy in the area and aim your development squarely at them. However, the true attraction was not educating people how to make money from property. Rather, it was to show how easy it would be to make money from buying houses on credit, doing some painting and decorating and flogging it off three months later. If Justin and Colin were doing anything sophisticated or difficult, the program would have lost its appeal.

Four million viewers tuned in to watch these jokers flip houses across the UK, and I was one of them. Oh, how I wanted them to fail. However, that was never going to happen. After seven nauseous programmes, the pair ended up with a net profit of £290,000.

The program created a myth. In around two years, Justin and Colin had taken £100,000 loan and generated a 290 percent return. It all looked too easy; a £100,000 was definitely within the reach of most homeowners, buying property is just a matter of visiting an estate agent and any fool can paint and buy furniture. The end result was a surge in small-property development. It helped fuel demand, which pushed up prices.

So, Justin and Colin, you did your bit to create the bubble. You are guilty as charged.

I am going to open this debate up; if there is anyone out there that you think should be denounced as bubble-criminals, please send your nominations here.

Seen this ad from the US?
http://www.youtube.com/watch?v=Ubsd-tWYmZw
"Suzanne researched this" - kind of sad and creepy.