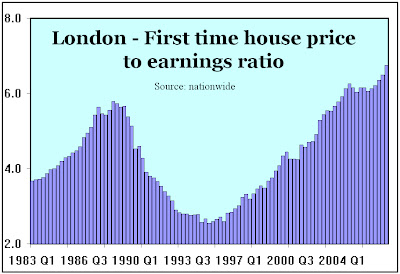 In London, the ratio of house prices to first time buyer income is almost 7. It reached that extaordinary level in March 2007.

Of course, this ratio is now irrelevant. There are no conventional "first time buyers" left in London. No one finances a house purchase in the capital just with their income. As yet, there are no mortgage lenders willing to give a loan based on 7 times income. So, anyone buying a house comes to the market with a large stash of cash. Could this ratio go higher? Personally, I never believed that it could reach 7, but that is where it is right now.

As this ratio has risen, homeowners in Londoners have become increasingly dull. They can't help but talk about how much money they have made from property appreciation. In fact, I am actively trying to purge my social network of all homeowners. I just don't want to hear how your slummy terraced house in Cricklewood is now worth "thousands more" than you paid for it. From now on, all my friends must be renters.

However, there is one episode that homeowners never talk about. They never want to hear about the dark ages - the years that followed the last housing bubble. Between 1989 and 1996, house prices in London fell. Yes, they fell and fell and fell. They kept on falling until the house-to-income ratio returned to its long run historical level, which is just three.

I recently posted an item in my blog Denial Wavering Across The Pond in which I noted the signs of cracks in the fanatical belief in an endless bubble.

Your comments about renting are a good economic pointer to reality; I write from across the pond where in some regions the ratio of mortgage payment to rent is 2:1.

The eerie thing is the lack of acknowledgement among what used to be called 'the broad masses.' This quietism is of course very much dependent on media silence.