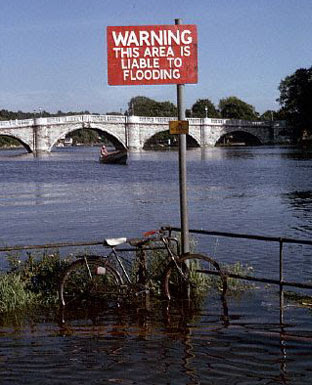 However, it isn't UK citizens that are driving prices up in London. It is rich foreigners, typically from Russia, and the Middle East. However, can London really be such a fantastic real estate investment? What are the long term prospects for housing in London? Answer - lots of water.

London has two key geographical features; a) it is flat, b) it it very close to the sea via the thames estuary. Given that the polar cap is about to melt, and sea levels will rise, it's a racing certainty that within a couple of decades London will be neck deep in water. The thames estuary will expand inland and take with it all that high net worth housing stock in Fulham and Chelsea. Clapham will cover up, while Teddington, Richmond, and other dreadful south London suburbs will disappear until the next ice age restores the north pole. It doesn't strike me as a particularly smart idea to buy a house that could end up being flooded. However, you'd have to be either insane or seriously misled to spend huge amounts of money on a house that is about to flood.

Is it too much to hope? Could the water level rise up high enough to flood Islington? Global warming will bring many devastating problems, but the idea that Islington could be flooded is definitely an appealing thought.

(Many thanks to Kevin, who writes the Baltimore Housing Blog for the link suggestion)

"Given that the polar cap is about to melt, and sea levels will rise"

If you are referring to the Arctic polar ice cap, it will probably melt entirely during the summer by 2050, but since Arctic ice is already floating on the sea, its disappearance won't affect sea levels. The Greenland ice sheet and the various Antarctic ice sheets may melt if CO2 emissions aren't reduced, but they will take much longer to do so. Sea level rise over the next century will come primarly from thermal expansion of the seas and will not be sufficient to flood London, though the floodgates will be operated more often to prevent tidal and/or storm driven surges up the Thames.

I think you are well-meaning on this issue so I suggest that you gain a better understanding of the predictions as they currently stand.

What? You mean there will be no cleansing flood? I am heading down to the estate agents first thing tomorrow.

Anonymous, I am not sure you are right. I thought that ice floated, with a ratio of 1 to 9. In other words, 8/9 of ice mass was above the water, with 1/9 above the water. If the polar cap melts, at least some of this melted ice would raise sea levels. Moreover, Greenland is defrosting, so the combined effects would probably cause London some problems.

BTW, you don't seriously expect a surge barrier to protect London from rising sea levels. The Greenwich barrier isn't there to protect us from global warming.

"The net upward buoyancy force is equal to the magnitude of the weight of fluid displaced by the body. This force enables the object to float or at least to seem lighter."

Water expands when it freezes, meaning it gets less dense, meaning the same mass takes up more volume. That's why ice floats. If all the ice that floats on the sea melts, nothing happens. If you don't believe me, get a glass of water, some ice, and conduct your own experiment.

"BTW, you don't seriously expect a surge barrier to protect London from rising sea levels. The Greenwich barrier isn't there to protect us from global warming."

Lets review what I said:

"Sea level rise over the next century will come primarly from thermal expansion of the seas and will not be sufficient to flood London, though the floodgates will be operated more often to prevent tidal and/or storm driven surges up the Thames."

I think that says that the seas will rise some, and thus the floodgates will need to be used more often because the base level a surge would build upon will be higher, even though the net rise will not be enough to flood London in and of itself, all during the coming 100 years. I don't think it says that the floodgates will hold back a rise sufficient to flood London.