A bad week for UK homeowners 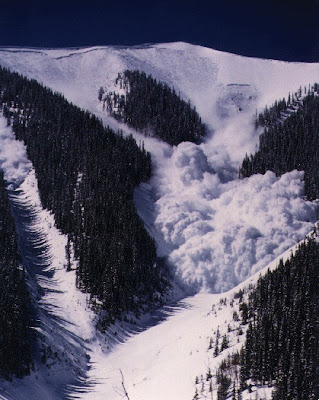 This week, UK home owners will begin to shift from one metaphor to another. Instead of talking about the housing bubble, homeowners will be lamenting the repossessions avalanche.

The shift will begin when the Bank of England jack up interest rates this week. The only oustanding question is whether the market will come crashing down quickly, or will it be a slow gradual collapse.

To some extent, this depends on how much the bank raises rates. Will it spinelessly increase rates by just 0.25 percent? Or will it get serious about inflation, and increase rates by a full half percent. The bigger the rise, the quicker the market moves into repossessions avanlanche mode.

So how bad will this week's rate rise be? Today's Guardian web site had a reasonable attempt at answering this question:

"Homeowners with average mortgages will pay £1,500 a year more in repayments because of interest rate rises over the past year. With another rise expected this week, those with a £150,000 mortgage could be paying up to £125 extra a month. The increased payments threaten further pressure on an overheated housing market as homeowners struggle to keep up with large mortgage repayments. Anyone with an average interest-only tracker mortgage of £150,000, which mirrors the base rate, will have seen repayments increase by £94 a month following three rate rises in the past year. A 0.25 per cent increase on Thursday would cost another £31."

The Guardian also pointed out that "London will be hit the hardest. Here the average loan is £210,000 and on an interest-only tracker mortgage - where the interest but not the capital is paid off - monthly payments will be up £175 on a year ago."

Rising interest rates is a wonder cure for bubble fever. With each hike, mortgage payments increase, and housing demand ebbs away. Repossessions start to rise, and desperation takes hold. The UK housing bubble is reaching the last pitiful months. The end is close. It is very close.