This time it is different 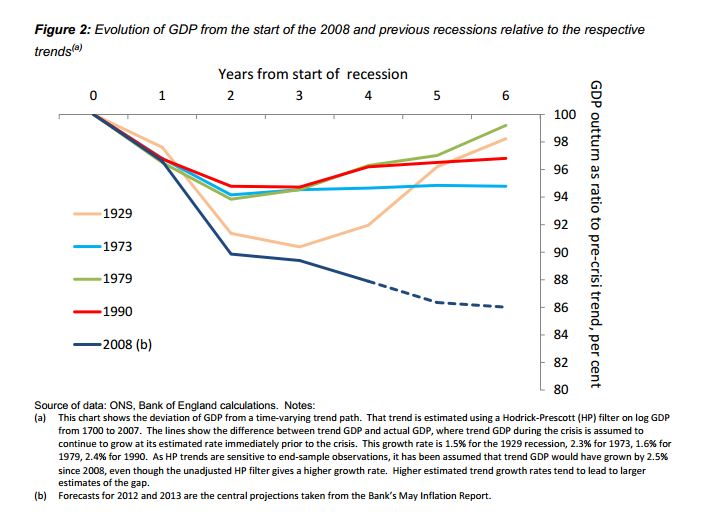 During the dot.com bubble, it was common for analysts and economists to explain the huge increase in equity prices in terms of the "new economy". Rapid technological change had transformed the world. The old rules for valuing stocks had changed. The double digit price appreciation of internet start-ups working out of a garage in California wasn't a bubble; it was due to the new fundamentals that drove the "new economy". There was a phrase that summed up the times; "this time it is different".

Investors soon found out that dot.com share prices were just like their old economy counterparts. Profitability mattered. Once it became obvious that the vast majority of dot.com start-ups didn't have a viable business plan, prices went through the floor.

That catch-phrase - "this time, it is different" - has staying power. It still rings in my ears. And when I look at the last five years of UK GDP numbers, it seems to have a resonance. Something is very different this time around. The post-Lehman down-turn has lasted longer than any other recession over the last 100 years. It is also the deepest recession the UK has experienced; deeper even that the great depression of 1929.

The UK economy is again shrinking. In real terms, the GDP during the first quarter of this year was about 4 percent lower than in 2008. The economy is about 12 percent below the level implied by historical trend growth rates.

Policy makers are out of ideas. Huge fiscal deficits, and quantitative easing have failed to restore growth. Actually, it is worse than that. We have failed to make any progress towards resolving the underlying causes of the crisis. Public and private debt levels remain at historically unprecedented levels. Nothing has been done about entitlement spending. The economy remains smothered in poverty-friendly regulations.

How did we get into such a mess?

Democracy - thats how we got here.

Im glad you gave the right prescription to fix the mess at the end there.

Trying to maintain the illusion of a lifestyle that can no longer be afforded in a more competitive world. That's how we got here.

I always believed that "this time it's different" are indeed very dangerous words - but unless we come to grips with the situation above and if we continue to drift, we'll drift that wee bit too far and all hell will break loose - including exchange controls...and maybe if you've got any & want to try and protect some of your assets somehow e.g. by buying gold, it'll probably end up being confiscated for the greater good of the country.

I guess you can run but not hide - maybe the world really is all in this mess together - unless someone knows different?

We have throttled our once-productive economies with

2) Endlessly growing unproductive parasites of one sort and another

and we continue to try and hold it all together by borrowing, printing "money", and general finagling of various sorts.

This is a blind alley, and we are approaching the end of it.

Don't ask me what the solution is, but the beginning of the solution must be recognition of the problem; we haven't even reached that stage yet.

This new world is taking soem time to emerge as profitable. Since workers are so unpaid, voluntary, or there is nothing to sell, other than an idea, even the profits are notional. Everyone expects things on the internet for free. And everybody suffers.

"How did we get into such a mess?" One answer is Blair/Brown. Another answer is Clement Attlee. The first welfare state was put together by 19th century Tories and Liberals and, especially, the Liberals in 1914; it was not pernicious. The second welfare state, however, started in 1945 and has proved to be a disaster. Add to it delicacies such as the philistine attack on education, (again principally Labour, starting in the 60s) and loonily unselective immigration, plus ever growing bureaucracy and managerialism from both Westminster and Brussels, and you have a recipe for a new Dark Age.

We've been propping up our standard of living on credit. Mea culpa.

I tried to keep my debts lower but my mortgage should be half what it is. I used the overdraft a bit too much. And I'm one of the better ones and stopped having holidays abroad and regular meals out years ago.

Inflation (real inflation) has been rampant for some while now. Cheap TVs but utilities and groceries have gone up.

dearieme if you are correct that it is all socialist excess causing the problems how come USA has the problem and Sweden does not.
It comes down to the man in the street working and spending his money and effort on productive things and not tertiary trivia i.e. cups of coffee or a fancy hairdo. Real wealth is only created when you dig something up (oil/coal) convert it (steel works) or add value by manufacturing complex items from the primary materials i.e. build cars computers etc. No wealth is created when you shuffle money around, buy/sell antiques, sell coffee and create fancy hairdo's. We have spent to much time on trivia and not enough creating real wealth.

"dearieme if you are correct that it is all socialist excess causing the problems how come USA has the problem and Sweden does not." Because the US is more Socialist than Sweden would be one answer. But much of the problem lies in the detail of the rules and you can't pick that up in attempts to correlate gross phenomena. Of course, the Blair/Brown bit - as distinct from the Attlee bit - isn't to do with socialism, it's to do with reckless and stupid public spending, hopeless financial regulation, and so forth - which might come easier to socialists or ex-socialists, but isn't strictly socialism.

Actually, what you have to consider with a recession are two things: what caused it, and how did we get out of the situation the last time?

Generally the cause is way too much credit, and way too many people not actually doing anything productive that might actually earn value.

Usually the solution is to switch the people who're doing useless stuff (or nothing at all) back onto doing useful stuff.

This recession would be just like all the others were it not for the elephant in the room: EU regulations. The EU is basically a corrupt organisation Socialist organisation, and like all Socialist organisations it has a core belief that it is always correct. It never, ever doubts that it knows best; this seems to be a distinguishing characteristic of Socialism.

Since it knows what is best for us and genuinely wishes to help us to utopia (this is important to realise: Socialists aren't evil, and do not wish anyone harm; quite the opposite in fact) it enacts regulations to try to steer behaviour. Because there are quite a lot of corrupt, self-serving little twerps in the EU, quite a lot of regulation gets steered by much more evil Big Business concerns into forms that benefit big businesses and lock out small businesses.

What we have ended up with is a regulatory structure which is so convoluted, so arcane and complex that small businesses are actively stifled, and larger outfits thrive in the vacuum thus created. The only kicker is this: it is small businesses which form the backbone of growth and recovery from recession, not big ones.

This leaves us in a bit of a bind. While ever the EU exists, so does its stifling miasma of regulations and since these are what is preventing recovery, we will simply mark time whilst the giant gets on with dying.