A two percent inflation rate by the end of the year? All things are possible... 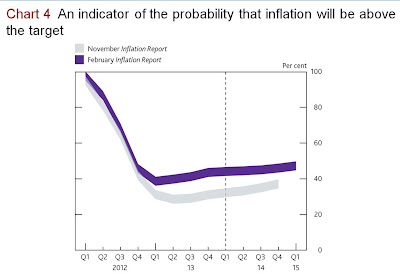 The Bank of England produced this intriguing chart in their most recent inflation report.

The chart illustrates their current assessment of the likelihood that the Bank will meet its two percent inflation target (the dark purple line).

Since the current rate is well above the target, it is a near certainty that it will miss the target in the near term. Hence, the probability is close to 100 percent.

Looking forward, the bank think inflation will fall sharply, such that by the end of the year the Bank thinks that there is 50 percent chance that the target will be met.

The most recent inflation number rose "unexpectedly". It was yet another "unsurprising" inflation surprise. This is consistent with the grim reality that the Bank has misjudged the post-crisis potency of inflation.

Will the Bank make the 2 percent target by the end of the year? All things are possible, but when our central bank has produced almost a third of a trillion quids worth of new money, you got to wonder about a 50-50 chance.

A two percent inflation rate by the end of the year - no chance.

Our currency is appreciating a bit against the Euro. That chart may indicate that they expect further strife in the Eurozone and a dreadful Christmas - the bottom is Q4-12.

Im not so sure its a good news story.

Sackerson, there is something called the demand for money. It is possible to hyperinflate with a declining money supply.

The bank are always saying that inflation is about to fall rapidly.

Here are some of their old predictions:

In February 2011, they predicted that the inflation rate in October 2011 would be 2%

And the actual outcome?

I don't believe them this time either.

Call me a cynic, but if inflation were about to collapse would the govt have put a halt to sales of inflation-linked savings certificates?

It is an observation that comes directly from the quantity theory of money.

Imagine for a moment, that neither the money supply or the economy are growing. However, the government announces that it will double the moneys supply in a year.

what will people do. They will dump cash, buy goods and real assets. The price level goes up.

This is because the demand for money has changed. It has fallen, and therefore prices go up.