Sterling devaluation; it made things worse in Europe and did nothing to help the UK economy 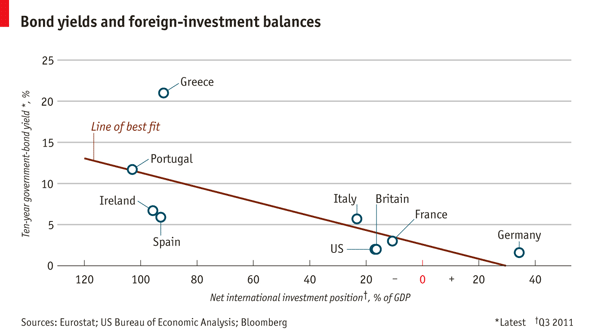 The Economist recently produced a chart linking the interest rates on ten year government bonds with the net external borrowing a country had previously undertaken. (This external borrowing was captured by the net international investment position. Countries both borrow and lend so obviously the net position is the key thing).

The result is pretty stark; countries that borrowed the most abroad - Ireland, Portugal and Greece - have all found themselves shut out of international capital markets. By this metric, Spain also looks vulnerable. The UK, in contrast, looks safer. So does Italy, the US and Germany.

If only the world were that simple and that we could explain the recent crises in Europe purely in terms of too much external borrowing. All the countries currently paying high yields are also members of the eurozone. These countries, by definition, do not have an independent monetary policy. The high yields could be picking up their lack of policy options in the face of huge economic shocks.

The UK also borrowed heavily before the crisis. Once the crisis exploded, it made full use of its monetary independence. Sterling devalued sharply. This significantly reduced our net international investment position. We took investor's money when the value of sterling was high; we will pay them back at a lower exchange rate.

In economic terms, a devaluation works in much the same way as a default. Creditors not debtors take the hit. Before we start crying a river of tears for for our mistreated foreign investors,buying foreign assets entails foreign exchange risk. Those foreign investors knew this when they took a gamble on the UK economy and invested here.

Nevertheless, all over the world, foreign investors took a major hit when sterling dropped 25 percent. Some of those losses are sitting on European bank balance sheets. These losses would have translated into write-offs and generally inhibited the recovery of the European banking system.

This is not to say that the sterling devaluation is the primary cause of Europe's current stagnation and torpor. Europe has a multitude of problems, and the current value of sterling is pretty low on the list. Nevertheless, the Bank of England's post-crisis devaluation made a bad situation worse. The sterling devaluation did no favours for our friends on the continent. It made their exports more expensive and reduced the value of their investments.

The Europeans can take some comfort from the fact that the devaluation did nothing to help the UK economy. Exports haven't really benefited from the lower value of sterling. Import prices rose sharply; the UK suffered the highest inflation rate of any advanced economy. The recovery after the recession was slower than any other recorded downturn. In real terms, the economy is still about 4 percent smaller than it was in 2007. In summary, the devaluation was a complete failure, like so much of the post-crisis policy response.

Still, the UK appears to be on the right side of the Economist's little chart. HMG has not yet been shut out of financial markets like the eurozone periphery. Our yields are low and our net investment position is unremarkable by international standards.

Before we breath a collective sigh of relief, there is iron law in economics; as soon as stable relationship between two variables, it falls apart.

". In summary, the devaluation was a complete failure"

Well, I'm not an economist and I'm suffering from a complete lack of sleep to boot, but..."a complete failure"? In comparison to what exactly? How do we know it was not relatively speaking a complete success compared to the theoretical outcome of any postulated alternative?

Just asking out of ignorance.

there is iron law in economics; as soon as stable relationship between two variables, it falls apart.

I'm pretty sure I read somewhere that our exporters collectively chose to increase profits rather than market share.