This is the age of austerity

I was really irritated by a recent blog post from Paul Krugman.  He was writing about UK historical debt levels.....

And you really have to marvel, given that historical record, at the deficit panic now so widespread.
That uptick at the end — you’ll see it if you squint — is what’s driving the Cameron government’s insistence on slashing spending in a liquidity trap. It’s also interesting to note — contrary to what you often hear — that at the time Keynes was writing, and calling for fiscal stimulus, Britain was substantially deeper in debt than Britain or the United States are now. 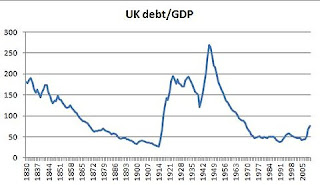 UK debt levels were higher both after the first and second world wars. Wartime government relied heavily on the patriotism of investors, in particular households, to buy war bonds.  That patriotism was not rewarded in the post war period when the value of those bonds were destroyed by decades of rapid inflation.   It was a lesson that has lingered in the minds of investors for decades afterwards.

Economic policies were largely dictated by the heavy indebtedness of the government, who had to limit interest rates in order to keep debt servicing costs down. During the post war period, the UK government ran balanced budgets up to the the early 1970s.   Despite this heavy hand of financial repression and tight fiscal policies, the UK economy was regularly subjected to exchange rate crises.  Remember the Suez crisis?  Or the 1967 sterling devaluation.  No, I don't either, but my undergraduate text books told me of sudden reversals of economic policies and decades of sub-standard economic growth.

However, history only takes us so far.  The plan fact is that modern bond holders have become very nervous about governments that have debt to GDP ratios higher than 100 percent.  Investors don't care that the UK government ran a large war time deficits and conned widows out of their savings in order to fund the fight against Hitler.  Investors today care about whether they will be paid the full value of their investments.

Recent experiences in Europe tell us that when a country runs up a debt level of more than 100 percent, investors are unlikely to keep lending.  There are no options for a bond financed stimulus.  Governments can run up deficits by relying on central banks to print money to make up the difference, but that quickly leads to inflation. The Bank of England is doing this at the moment. It is printing money to finance the UK fiscal deficit.  This is why the UK has the highest rate of inflation of any advanced economy.  This is also why UK living standards are falling rapidly.

As this week's events in Europe prove, no one seriously thinks that another round of fiscal stimulus is a viable economic strategy. Keynes is a defunct economist, and Keynesianism is, intellectually speaking, a spent force.  Mr. Krugman needs to catch up with the moment.  This is the age of fiscal austerity.

Alice are you still a bitter renter ?
If so buy your self a repossession ,there will be loads of them quite soon .Inflation will ease the pain of payments.
Intrest rates will lag the inflation rate and Bob s your uncle!
That's the way the UK works, and with the exception of gold
How else can you save.
It's not how it should be but it is the way it is.
Thanks for a very good blog.

Wasn't the UK a different place back then? Some sort of global power with some sort of clout? In the economic global-levelling of the future, we'll just be another island not in the sun (harry belafonte?).

Krugman is a total twonk.

Krugman needs to be killed.

You also have to factor in that the post war period was a period of high technological change, and its technological change that drives growth. Think of all the things that were invented or developed during the war (jet engines, electronics, pharmaceuticals, mass production techniques etc etc). Add that to the rapid rise of the use of electricity which started in the 30s, and you have the conditions for very rapid growth, which can sustain high debt levels.

What do we have thats comparable? The only thing I can think of is genetic modification, and that is heavily controlled/prevented from being developed. In fact with our obsession with 'climate change' we seem hell bent on returning our economy to the 1950s anyway, so the likelihood of it growing at all rapidly any time soon is pretty slim.

As Stevie b. says - the UK was an imperial governemnt that ran a trading block by whatever rules we wanted to. ( I always remeber the lesson on Terms of Trade from 'O' level economics explaining how it was a hang over from imperial times ).

"Think of all the things that were invented or developed during the war .... mass production techniques": for Britain that's true - but the war in question was the Napoleonic. 'twas Brunel's Dad wot did it.

Does The UK need global clout? It's like a little man spoiling for fight in stacked heels. And yes, interest rates rising will hit everyone: buy-to-let investors, people on low wages in debt, and everyone in debt ie everyone with a mortgage. And around we go.