The Republic of Retirees 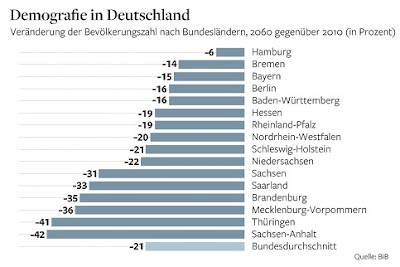 The penny has dropped, as the English might say, in Germany. The German newspaper Die Welt produced a shocking graphic, illustrating the projected  population decline in each federal state by 2060.  Germany is getting old very fast. Germans aren't producing enough children to replace the current population.  Inevitably, this can only mean one thing.  There will be far fewer Germans in 50 years.

Of course, immigration can arrest this trend.  However, the demographic crash in Germany is so brutal and sudden that the inward flows required to stabilize the German population would be more accurately described as re-population rather than a benign migration.

Germans often have a strange optimism in adversity.  According to Die Welt, ageing brings with it opportunities.  Demographic change will create at least a million new jobs in the health care sectors; doctors, nurses, especially the geriatric care ones. Yes, I can see that logic.  The implication for the German car industry, I would hazard to suggest, is less certain.

Die Welt's optimism has a technlogical dimension. The ageing population will also "accelerate the use of robots to replace human labour." Apparently, Germany is well placed to take advantage of this transformation, given its high tech export orientated industrial sector. The German vision for Europe is one where German designed and built cyber-nurses look after ageing populations across the grey continent. There is nothing like talking up technology to avoid consideration of a deep seated social issue.

However, I have a different question; if the German population is about to start shrinking, it follows that the German economy will also start to slow and possibly decline.  So, how will Germany support the Mediterranean basket cases?

If anyone has an answer to that question, please let me know.....don't tell me it will be cyber-nurses....

Some states will be down 41%. Anyone interested in buying German property?

"So, how will Germany support the Mediterranean basket cases?"

Germany won't. Because Germany can't. It's that simple.

Well the ones left will at least have liebensraum.

We should rejoice that populations fall. Less people equals less resources consumed. All the other flora and fauna on the planet stand a better chance of survival if the human population declines. A planet of with perhaps a couple of billion people living prosperous and well is utopia surely?

Immigration is not the answer; immigration is never the answer, and certainly not in Germany, where any immigration means replacing the existing population with one less industrious, less productive, less likely to obey the law, and so on.

A Germany populated by devious and lazy third-worlders won't be able to support itself, never mind the PIIGS.

Germany did have a block on Polish immigration, which has now (or soon will be?) expired.

Another problem with Germany is the cost of energy. Energy is an economic multiplier. Cheap energy allows for a large economy, expensive energy only supports a small economy. The Germans are following a path of self destruction by the irrational phasing out of their nuke power plants, without a suitable (cheap) replacement.

How will Germany support the Med idiots? Wrong question. Banking is now global. Thinking about banking at a national level is quaint old fashioned thinking (and idiot politicians still don't understand that either).