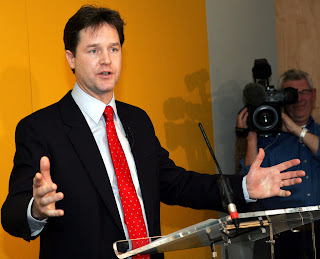 With a single phone call, Deputy Prime Minister routed the French. He castigated the French Prime Minister Francois Fillon, telling him that his remarks about the UK's credit rating were "unacceptable" and that steps should be taken “to calm the rhetoric”.

"Prime Minister Francois Fillon on Friday called the Deputy Prime Minister of Britain, Nick Clegg, to clear up misunderstandings after his statements describing economic developments in Britain as “alarming". The Prime Minister ”would not want to adversely affect the credit rating of the UK," said his spokesperson on Friday."

So well done, Mr. Clegg for delivering victory over that capricious enemy from across the English Channel. I sense national renaissance and economic recovery will quickly follow.

Despite being carried away with patriotic fervour following Mr. Clegg's victory, I still have one nagging thought, who was right on the substance?

That the politicians of the nation of Descartes can propound such stuff is alarming.

"The answer to stupidity is more stupidity."

Young Cleggy will take us to the sunlit uplands of Stupidity Nirvana, then.