If the euro crashes, the UK will not escape a whipping 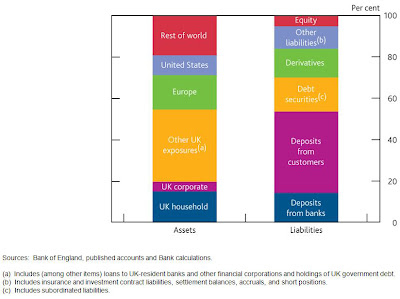 All this chatter about the immanent collapse of the Euro is extremely disturbing.  The UK would not would escape the consequences; all would be punished.

Our banking system is very exposed to Europe. Almost 17 percent of UK commercial bank assets are credits for European customers. UK bank capital buffers (marked as equity on the liabilities side of the above chart) only amounts to a little over 5 percent of total assets. The UK banking system would be bankrupted if a third of those European credits were not repaid.

Under normal circumstances, assuming a loan loss rate of 33 percent would be absurd.  But these are not normal times. If the Euro crashes, the payment system of 17 of our closest trading partners would collapse.

There are few historical precedents to guide us. I can only think of two; the collapse of the Austro-Hungarian empire after the first world war and the end of the Soviet Union. In both cases, the economic consequences were appalling.

Lets hope that the Eurozone can cobble together a rescue plan.

A rescue plan by the same imbeciles that are bankrupting the economies .. yes very good !!!

"Lets hope that the Eurozone can cobble together a rescue plan."

They couldn't agree on how to connect a horse to a cart!

The end of the Western Roman Empire was pretty bad too.

Sooner poor and living free than existing in slavery.

What on earth makes you think that's the choice?

"Lets hope that the Eurozone can cobble together a rescue plan."

Au contraire, let's hope that they can't: it is the only way this mess will be sorted out properly.

And it's also the only hope Britain has of re-establishing itself as a free independent self-governing nation.

Worth a bit of pain imho.