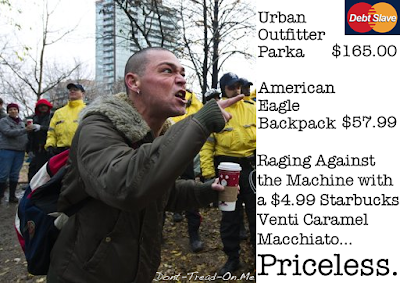 The occupy movement and starbucks must have been a marriage made in heaven.

Starbucks, the official sponsor of clueless tossers ranging from people who watch Friends too much (i.e. at all) to people who imagine themselves to be radicals who would be amongst the first up against the wall if the revolution they want ever took place.

This unworthy of you Alice, this sniping at the Occupy protests. How do you know where he got his backpack from: borrowed? Donated? Bought second hand?

People are protesting with the slogan that banks were bailed, they were sold out. Bankers bonuses are rising, welfare for people who lost their jobs because of the bankers is being cut. All in this together? Not really.

Hold on, Renter. "All in this together" is a coalition slogan. The banks were bailed by Labour. Your rhetoric is therefore incoherent.