Its official, the most recent recession was the longest in almost 100 years 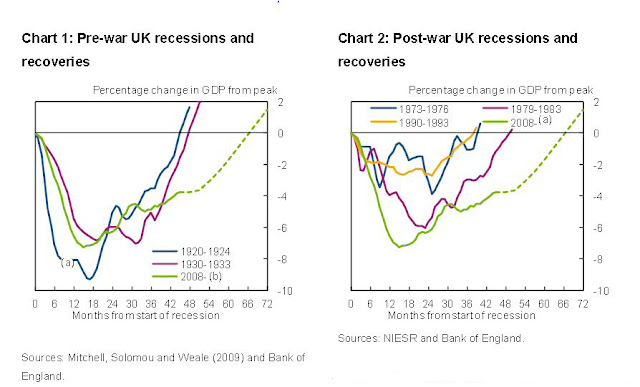 Martin Weale, external member of the Monetary Policy Committee, Bank of England recently gave a speech, where he compared the recent recession with previous ones.  It was a shocking assessment.

"We are experiencing the slowest economic recovery since the First World War.There have been six recessions since 1920.... In Charts 1 and 2 I show the time profiles of these (recessions).

The 1932 trough, like the trough in the current recession, was about 7 percent below peak with the recession in 1979 being milder. But we can also see that, for the three completed cycles, the time needed for output to recover to its pre-recession level was no more than four years and one month.

We might now ask how long it is likely to be before output regains its level of early 2008. The central estimate of economic growth associated with the MPC’s latest forecast, published in the Inflation Report, shows this happening in the third quarter of 2013."

To summarize; the 2008 recession was deepest since the end of the second world war, and the recovery has been the weakest in almost 100 years.  The UK economy will not return to its pre-recession output level until the second half of 2013.

Here is a curious question; what is the key difference between this recession and previous ones?  Quantitative Easing - the Bank of England's attempt to systematically support commercial bank balance sheets by printing money, creating negative real interest rates and robbing savers.

Rather than speeding up economic recovery, Quantitiative Easing has delayed it.

Agreed. QE - a bad policy that made things worse.

Arguably QE made things worse but the sacred cow of UK housing had to be propped up. Although with fairly static house prices, inflation is reducing their real value of course.

I read somewhere (perhaps even this blog) that near 0% savings rates led to £43bn lost in interest with an associated loss on tax take.

I argue for a rise in interest rates, depress house prices a bit, create more liquidity in the market and clear the stock of houses being held in weak hands.

Great chart Alice! I'm glad you are still putting this sort of information in black and white.

The current government inherited a mess and I think it is going to take decades to sort out.

Sadly QE and low interest rates is the route deemed (by Mervyn King) to be less painful because it keeps more people in their homes. Unfortunately the pain of those who can't get a house is somehow forgotten.

There's even more pain to come (in the form of poverty) because those who struggle to get a mortgage will probably only have a tiny pension. Those who decided to not get a house will also have a smaller pension because of all the dead money paid in rent.

It may be that what we are going thru is partly a correction. Britain's economic activity and living standards over 30 years have become dependent on ever-escalating debt. As the amount of borrowing is now contracting then our economic activity is naturally falling back and those jobs which depended on endless debt will not return.

However given the govt has much more to do in terms of balancing the budget and the needed cuts are not even a glint in Osborne's eye yet then the time when GDP reaches 2007 levels again may well be a decade or more away (thats if we ever reach them at all - I personally believe mass immigration will prevent this).

The current government inherited a mess and I think it is going to take decades to sort out.
add more infornmation.

The current government inherited a mess and I think it is going to take decades to sort out.
add more infornmation.

A financial mess. Something like 600bn borrowed out over their term was irresponsible in my opinion. In fact so irresponsible the Queen introduced a law to curb borrowing.

The last government caused a structural deficit which was also irresponsible. A bit of a balls up!