What is that old line about the definition of madness? 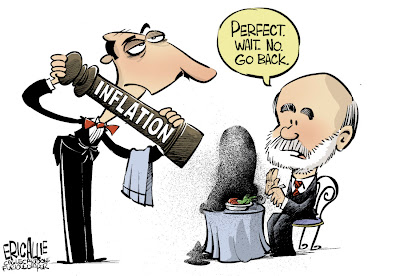 Quantitative easing is back. The Bank of England is on its third attempt to reflate the economy by printing cash.

We are now four years into the crisis and policy makers have made little if any progress towards stabilising the economy. Growth is non-existent, inflation is running at 5 percent, unemployment is high, and the housing market continues to slide. Inevitably, the FTSE is in the toilet.

Fiscal policy is the only area where there has been any progress. Even here, the results have been somewhat paltry, although the hope is that things will look better next year.

Printing money doesn't generate income and wealth. Only production can do that. This requires entrepreneurs finding suitable labour and acquiring capital in order to make things.

Why? Because firms need something much more important than loans in order to survive, and ultimately prosper. Firms need macroecoomic stability. They need to believe in the future.

Quantitative easing means future chaos; it means inflation, negative real interest rates, and the possibility of more crisis. Entrepreneurs understand that QE is a panic reaction; a cheap attempt at creating the illusion of prosperity. It can not be a basis for returning the UK to stable growth.

The previous two attemps at quantitative easing only served to prolong the crisis. The third attempt will also fail. There is that tired old line that the definition of insanity is to keep trying the same failed policies, expecting things to change this time. Yet despite its overuse, it accurately explains the behaviour of the Bank of England.

Given that most money is debt. And that if the public is paying off debt in these worrying times then that would indicate a contraction in the money supply. This would be catastrophic. Therefore it may be that releasing some debt-free fiat in lieu might be a timely move.

No idea if this is the current scenario. Im jus' sayin'.