Yes, food prices are increasing because of speculators

World food prices have become highly politicised. Two views are battling it out. First up; the supply-siders, such as Paul Krugman and Ben Bernanke, who claim that prices are up because of global warming, declining harvests and world population growth.

Then, there is everyone else, who claim that it is the fault of speculators.

Here is how Mr. Krugman put it:

"What’s behind the surge in food prices? The usual suspects have made the usual claims — it’s all about the Fed, or it’s all about speculators. But I’ve been looking at the USDA World supply and demand estimates, and what stands out from the data is mainly that we’ve had a huge global harvest failure."

"..it sure looks like climate change is a major culprit. And it’s not just the (Former Soviet Union): extreme weather elsewhere, which again is the sort of thing you should expect from climate change, has played a role in bad harvest around the world."

Lets dispense with the climate change issue first. World wheat supply fell by 0.1 percent in 2010, and it is projected to fall by 5 percent in 2011. As the chart below suggests, there is nothing unusual about recent supply developments. In fact, projected 2011 wheat production is the fourth highest since 1995.

The World supply of wheat jumps around every year. This is due to fluctuating weather conditions. Anyone with a passing knowledge of farming knows that. Is the recent fall due to climate change - absolutely not. Linking recent food inflation to climate change is just absurd. 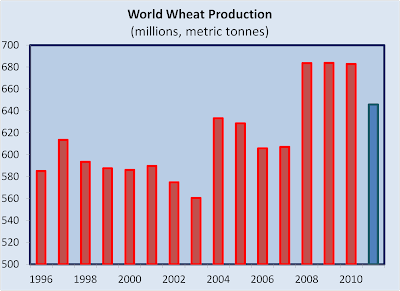 However, climate change point was merely an addendum to Krugman's argument. What about the more substantive point linking food inflation to a supply shock?

All speculative bubbles start with some kind of supply or demand shock. It is part of the pathology of speculation. The more substantive issue is whether originating shock can fully explain the subsequent price movement. In other words, can a 5 percent reduction in supply generate the following price movements? 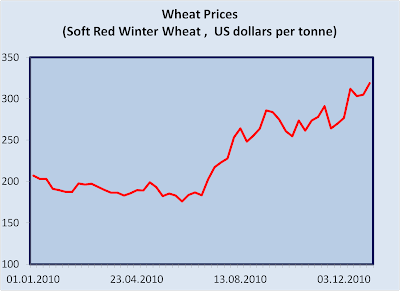 Wheat prices are up about 50 percent in six months. The supply decline during that period was 0.1 percent. However, the anticipated decline in supply for this year is over 5 percent. That sounds a lot like speculation. Buy now on the expectation of higher prices in the future.

Low interest rates facilitates speculation in wheat. Suppose a speculator can take out a loan at 1 percent, buy a few tonnes of wheat at $200, stash them away in a warehouse and sell them six months later at $325. Does that not sound like a familiar wheeze? Here is a clue; think houses, dot.com companies, and currency futures.

Meanwhile, the rest of the world pays more for their food. Moreover, there is a kicker. The greater the amount of inflation, the greater the incentive for commodity dealers to speculate. More speculation means more hoarding, which in turn, creates more inflation. There is only one thing that can stop this cycle - higher interest rates.

For a liberal like Mr. Krugman, this is a very uncomfortable chain of events. He argued vociferously for lower rates. He believed that looser monetary policy would reduce the interest burden on US borrowers and prevent a further deterioration in US economic activity.

However, those low rates are now facilitating a speculative binge that is seriously hurting the world's most economically vulnerable people. At the risk of being excessively emotive, low interest rates may have protected debtors in the developed world, but at the cost of high food prices in the developed world. It is just one more miracle of Globalization

Krugman has been slowly going mad for years now. That article was a disgrace.

ok well put, but its the governments of the USA and UK policy to inflate another bubble since they can't face the lost of wealth that we should really have taken.

I don't believe its all purely a bubble tho, ex-farm prices have been low for years so there was scope for upward movement.

Its partly due to inflation and stronger demand from Asia too.

How many times do I have to point it out? Agricultural commodity prices have been falling in real terms (and often in nominal prices also) for decades. The recent rises have merely reddressed the balance slightly. If prices had kept up with earnings or (heaven forbid) house prices, then you might have something to complain about. As it is the percentage of average earnings that is spent on food has fallen for decades and only just recently upticked slightly.

Your point is a good one, insofar as it debunks the idea that population growth is the cause of the recent surge in prices.

Certainly, you are right that food prices, over the long run, have fallen relative to the price of labour.

Nevertheless, the rise in food prices over the last six months is very large. Is it due to speculation or a supply shock? I think the former.

Biofuel production is the major cause of the growing (and will continue to grow) price of food.

Biofuels are currently derived from food crops. The IEA estimates the total biofuel production at 286 million litres (1.8m bbl) per day. Biofuel production is increasing at 8% per year. To give some idea of scale a hectare of rapeseed yields approx 1000 litres of biofuel. (Different food crops have different biofuel yields).

The USDA crop production figures (and those of other agencies) quote the crop yields, regardless of the final use of those crops as food, or fuel.

Prices are trending upwards (biofuel), yields are down (bad weather). Yes the crops market is bullish, but singularly blaming *ankers is a little blinkered.

The real picture is multi-faceted, but to rely on the establishment mouthpieces like Krugman and Bernanke is to draw attention away from the man behind the curtain.

Bill hits on at least part of it; it is down to global warming, only down to the skewed incentives associated with the green insanity that accompanies it.

Elsewhere speculative trading on wheat futures may be, in part, adapting supply issues to demand, and, in part, are coining it in using low interest rates; truth he told how much incentives have been skewed we can't know whilst governments can still churn out bank notes like toilet paper.

It should also be pointed out that many of the countries currently experiencing pain associated with rising food prices in one way or another have state subsidies and price fixing associated with food production and that this bears some of the blame now.

To compound on my point above here is Tim Worstall pointing out some evidence that the change in speculated food price is close to what would be expected were it not mitigated over a longer period of time by speculators.

There is quite a simple rationale to this; ultimately speculators along with food producers are at the mercy of national governments - was it not Russia who helpfully called force majeur a few years ago abrogating wheat producers from their contractual responsibilities to business?