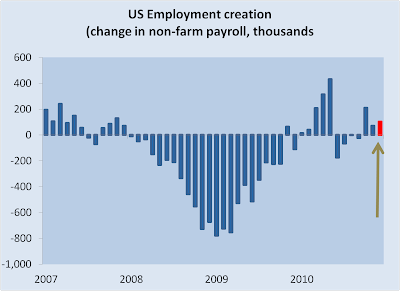 President Obama described the December uptick in US employment as a "clear" trend pointing to job growth. I hope he is right. Nevertheless, the number looks weak to me. It is on the right side of zero, but only just.

The US labour market appeared to recover strongly during the opening months of last year. During the summer, the recovery stalled, raising fears of a double dip recession.

More recently, job growth seems to have returned to the US economy. Yet, new job creation is insufficient to make a serious dent in the appalling levels of US unemployment.

The recovery is running out of steam.

Just wait for the double dip, it is coming this year.

That may the Official position but in Table 15 of the U-6 statistics it clearly shows that the true unemployment rate went from 16.3% in November to 16.6% in December. (in the unadjusted figures)

These figures then get seasonally adjusted based on the CES Birth-Death Model that the US Labor Dept uses to "create" jobs into existence.

24-thousand jobs appeared this way. True, 21,000 jobs in construction went away, but that was more than offset by 12,000 more in trade, transporation, and utilities, along with financial activities (Banks etc) and education and leisure and hospitality. Maybe it was a GREAT season for hiring at ski lodges, just can't say. They have had a lot of snow again this year.

Not forgetting that Congress has refused to extend their equivalent of unemployment benefits above 99 weeks. So anyone out of work for 2 years or more doesn't figure in the Official unemployment figures anymore.

I'd suggest the Mark Twain's comments about liar, damn liars, and statistics would fit about here, if a person was so cynical as to suggest it. Which I'm not, of course.