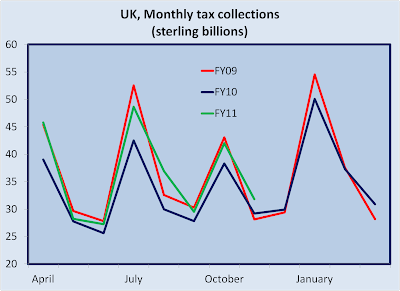 That nice Mr. Osbourne, who recently became Chancellor, will not be happy to see these numbers. UK monthly tax collections this fiscal year (FY11) are lower than they were in 2008-9 (FY09).

Back in FY09, HM Revenues and Customs were collecting an average of £36.5 billion a month. Last year, (FY10) that number had dropped to £34 billion.  During the first seven months of this fiscal year, collections averaged at £36 billion.  If only public expenditures had done the same.

Hopefully, January will be a bumper month.  The new VAT rate will be in force and revenues should recover.

That is the kind of tax collection that builds deficits.

Revenues should pick up in January. The vat rise will see to it.