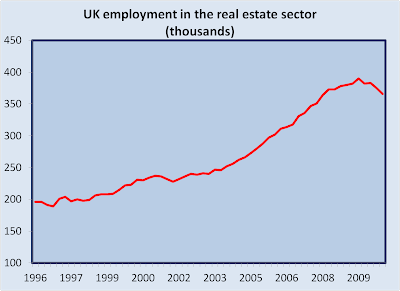 This is one of those "sign of the times" charts.

The housing bubble also generated a bubble in real estate agents. The number of people working in real estate activities almost doubled between 1996 and 2009. As of September last year, there were around 370,000 people employed within the sector. That is about one estate agent for every 70 workers in the UK.

This staggering growth in the number of real esate agents was brought home to me about 18 months ago when I visited St Albans. It is a small but beautiful town just outside of London. However, the number of estate agents and mortgage brokers in the town centre was extraordinary. Perhaps, every fifth shop front was somehow related to real estate activities.

Over the last year, the numbers employed in the sector have declined by around six percent. However, housing transactions are down by around 50 percent. This would suggest that salaries and bonuses have also fallen by around a half.

This is not the time to be a real estate agent.

This confirms an observation from my high st - real estate agents are doing nothing. What a waste!