Once the financial crisis kicked off in 2008, the Bank of England cut the bank rate to near zero. High street banks lost no time in passing on those lower rates to depositors.

So how much have savers lost since the crisis began? The Bank of England produces a nice table that provides an answer. It is table B3.1 in their Bankstats database. It offers quarterly information on UK banking sector income and expenditure on a consolidated basis. 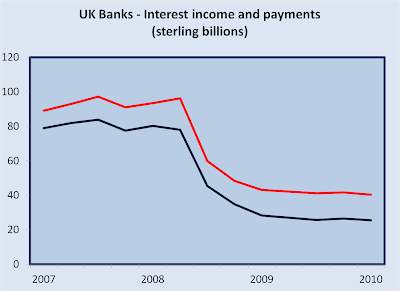 Although it might be difficult to see in the chart above, tn terms of interest income, the crisis has been very good for banks. They have managed to increase their net income by around £5 billion every three months - a 50 percent increase. 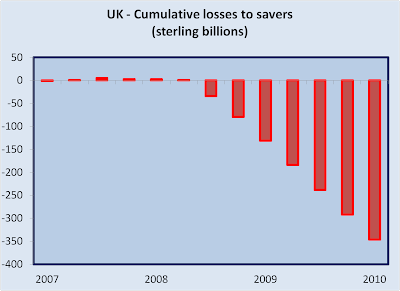 Let us assume for a moment that the Bank of England did not cut rates, and that the high street banks continued to pay out £80 billion a quarter to savers, receive £90 billion from borrowers, and keep £10 billion quarter as net income. How much additional income would have savers received. Since the size of bank deposits and loans have remained broadly stable, we can work out the net gains and losses to borrowers and savers.

The losses inflicted on savers are staggering. The cumulative loss for savers is £350 billion. Over the last year and a half, savers have been losing £18 billion a month. In 2009 alone, savers lost £185 billion - around 15 percent of GDP. 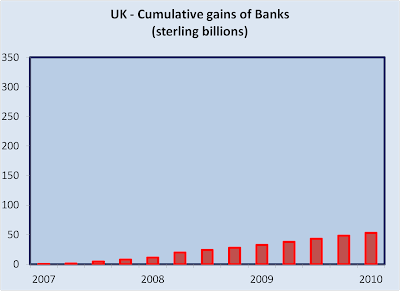 How did the banks get on? Not bad. They are up about £50 billion. 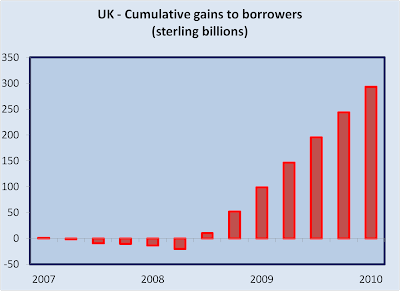 But the real winners were borrowers. Their net interest costs fell by almost £300 billion.

Seen in this light, the Bank of England's interest rate cuts were a massive income transfer scheme from savers to borrowers. For every pound taken out of the pockets of a saver, £0.85 was put into the hand of a borrower, with the banks picking up the remaining £0.15. It was yet another massive bailout that punished the prudent and rewarded the speculators.

The Bank of England will doubtless justify this arbitrary redistribution of income in terms of saving the economy and preventing banks from going bust. Well, the economy sank into a deep recession, the government is running a record deficits, and unemployment rose sharply. The net interest into the banks was really rather modest. As we'll see in a later blog post, banks continue to pay dividends while banking sector wages increased.

Rather than saving the economy, these interest rate reductions were irresponsible. They destabilised the economy and created perverse incentives that will have a devastating effect on the long-term growth potential of the economy.

That is very puzzling.

Hence the figure that Save Our Savers bandy about, that UK savers are losing £30 billion a year.

But I checked table B3.1 (in case it said 'annualised figures' or something) and it reports exactly the figures that you use.

The UK banking system is several times GDP. The number I use includes all interest bearing assets, which will capture the losses that pension funds make.

As you will see, the table also includes the amounts earned directly from deposits. It is a smaller number, but still very large.

We have so much to thank Messrs Blair and Brown for. No wonder Labour is doing so well in the opinion polls.

A great many people in the past needed the interest on savings to fund an ordinary lifestyle. So this money has gone out of consumption to where? And the media are trying to herd us all into shops to spend. Of course on a basis of debt.

I have linked to it from my place.

I like to refer to this as "stealing your granny's life savings".

And a lot of tax revenue forgone by HMRC. Much of the interest being taxed at source.

That number you quote sounds a lot like the amount of cash that the banks have trousered. I reckon that they have received GBP50 billion over 21 months. That is close to the number you mention.

Simple solution is to withdraw your money from the banking system and use cash. For your savings there are better more stable assets in which to save in.

The current system will never support a return to higher rates. As soon as this happens the banking system will collaps again as in Greece and Ireland.

Alice, very interesting. As usual, it's all smoke and mirrors. The Establishment including the Banks always win. Thank God there are some of us still fighting the fight instead of filling our heads with shite of the Telly.