More wikileaks means more fun for the rest of us 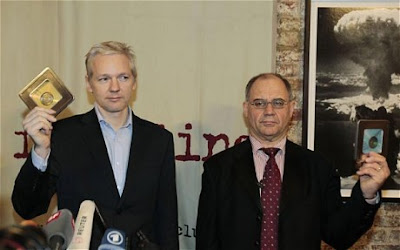 Such moral complexities; an alleged rapist accepts a disk from a thief who stole it from his employer. However, the disk may contain a ton load of information about tax evasion by up to 2,000 wealthy individuals and corporations, including 40 politicians and some celebrities.

The thief - Mr. Elmer - will now return home to face a Swiss court. The other bad boy - Mr Assange - will fight it out here in Britain to avoid facing a court in Sweden. As for 2,000 individuals and corporations named on the disk, will they evade a court as effectively as they did their taxes?

All these revelations, they are fun aren't they?

That will be the politicians rich list then ?
The Kinnocks ....LOL.

What a wicked world we live in.

Haven't they heard of torrents?
Sadly torrents don't have the photo op that Assange needs to keep his name in the public eye until his book comes out!

Philippines real estate said...
This comment has been removed by a blog administrator.
18 January 2011 at 03:59