London property market is burning up 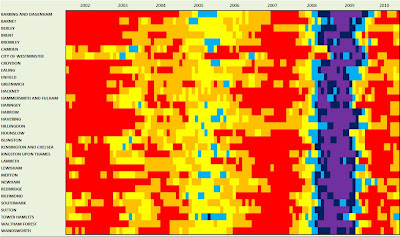 A couple of things to note.  First, the dark strip that starts towards the end of 2009 represents the crash.  As we know the change was abrupt.  This can be seen by the sudden shift from dark red to blue.

Second, the market recovered in 20010.  However, the graphic tentatively points to a more recent slowdown - the right hand side edge is shifting from dark red to orange and yellow.

Finally, the data points around 2005 are very revealing.  At that time, the London property market was losing steam.  Unfortunately, the Bank of England started worry, and cut interest rates.  London prices surged afterwards.  Many of the worst excesses of the housing bubble occurred between 2005 and 2007.

Just think for a moment, what would have happened if the Bank of England had held their nerve and kept interest rates at more elevated levels.  Property prices would have cooled, the impact of the financial crisis would have been muted and the UK economy would have been in better shape to handle the crisis.

That rate cute also killed the Bank of England's inflation credibility.  For 40 of the last 48 months inflation has been above the 2 percent target.

Ultimately, the rate cut in 2005 was the worst monetary decision in two decades.  We are paying for it now.

Also, the market did not recover in 20,010 - or at least my crystal ball isn't reaching that far forward.

What's the source for the data and the method. Would love to crunch the numbers for a other areas of the UK.

Annual percent change, with the colors assigned according to size. 10 percent rise is a deep red etc.....

I could do the same for other areas. In fact, I have already done the South West of England (see back posts).....