The great locomotive of the world economy 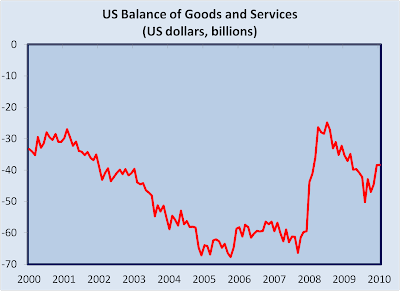 The is an old adage that says that "what can not continue, won't".  The US external deficit seems to defy that old aphorism.

For the last 10 years, the United States has been running monthly deficits ranging between $30 billion and $65 billion. Adding up all those deficits over 10 years comes to $5.7 trillion. Currently, US GDP is approximately $14 trillion.

How did the US managed to run up a decade of deficits amounting to about 40 percent of current GDP? The United States used government debt to pay for this staggering inflow of goods and services. As this deficit increased, countries in Asia built up huge stocks of US dollars, typically in the form of US treasury bills, as foreign reserves.

Both sides of this transaction were happy. The US received cheap goods, while inflation remained subdued. Asia, particularly China, enjoyed limitless access to a huge consumer market. This provided the basis for an extraordinary period of economic growth and technological transformation. In effect, the US external trade deficit was the locomotive of world economic growth.

The global financial crisis threatened to derail the locomotive. The US external deficit almost halved in the wake of the crisis, sending a massive trade shock through the rest of the world. However, the shock seems to have been short lived.

Throughout most of 2009 and the first half of 2010, the deficit started to increase. With it, world trade recovered. Asia saw a rapid resumption of growth.

During the last couple of months, the US external deficit has again changed direction. It has begun to narrow. The correction is not as dramatic as the one that occurred after the crisis. Yet, it appears to have more momentum.

Lawrence Summers, the former US Treasury Secretary, described the trade relationship between China and the US as the financial balance of terror. If the US stopped importing, China will stop growing. If China stops buying US Treasury bills, the US government would no longer be able to sustain its huge fiscal deficit.

Yet it is difficult to see how this exchange of government debt for goods can continue forever. It is hard to imagine another 10 years of US trade deficits of a similar magnitude to those recorded in the previous decade. At some point things will have to change. The question is whether this adjustment is now underway.

Least we forget, oil exporters also did very well from the US trade deficit.

Its one of those tectonic plates things isn't it? The tension builds up for decades and suddenly Kaboom!!! The world is never the same again.

It will happen. And when it does, it won't be pretty.

Both China and America are consenting adults. If both are happy then why not.

It's an ex-locomotive. It's joined the choir celestial.......

I read somewhere recently that the Chinese trade surplus is closing up. Maybe the world as we have known it is changing.