Eurozone inflation creeps above the two percent target in December. 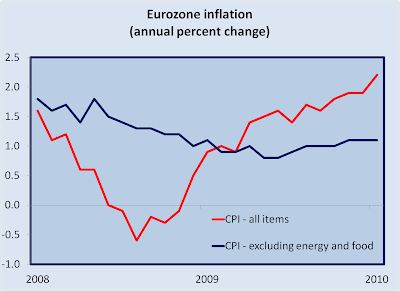 In December, the Eurozone inflation rate crept above the 2 percent target. Higher food and energy prices were the primary reason for the above target out-turn. However, if these items are extracted from the Eurozone CPI, then inflation was broadly flat at around 1 percent

The Eurozone is facing an existential crisis. The Irish and Greek governments are unable to finance their fiscal deficits and are now dependent on EU financing. Nevertheless, the crisis has not derailed the ECB and its efforts to maintain price stability. Over the last two years, it has maintained a consistent track record keeping inflation under control. This stands in stark contrast to the sorry efforts of the Bank of England. With lamentable regularity our central bank has failed to meet its inflation objective.

While the ECB's consistent and credible commitment to keeping prices stable means that it is in a better position than the Bank of England to deal with the growing threat from rising food and fuel prices. True, this may seem like cold comfort when the Eurozone itself is threatening to fall apart. Nevertheless, the stability of the Eurozone would be in further doubt if inflationary pressures were higher.

Nevertheless, inflation momentum is growing. The ECB faces the same uncomfortable trade-off as the Bank of England. Should it raise rates to keep inflation under control, or should it maintain low rates to protect the Eurozone banking system?

It is inflation first and last with you Alice.

In your past, you must have suffered a deeply traumatic experience related to inflation. I know, you were born just before Weimar and saw your daddies' savings wiped out by hyperinflation.

Alice is right to be concerned. Hyperinflation does not just destroy savings.It destroys society and morality.For some scary bedtime reading try the Adam Fergusson book The Death Of Money.