Charity: which country gives most.... 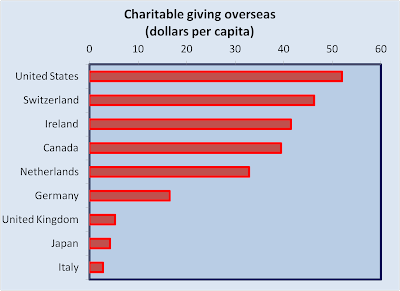 This chart confirms what I have always believed; that Americans are incredibly generous people.

The data behind this chart captures private transfers by charitable organisations abroad. Americans, on average, give $52 a year to non-governmental agencies for development purposes outside the country.

This is the voluntary type of development aid, not the sort that is enforced by a tax system. This is people sticking their paws in their handbag, opening their purse, and pulling out some notes for a collection box. This is genuine giving.

The UK, in contrast, doesn't score terribly well. We give on average five dollars a year; less than a 10th of what the typical American gives. We are fractionally ahead of Japan and Italy, but we are well behind Germany, the Netherlands, Switzerland and Ireland.

So, the next time you hear someone go on an ignorant rant about America and its foreign policy, gently remind them about America's extraordinary private and essentially personal generosity to other less fortunate people in the world.

(The data is from the OECD).

Imo China are the most generous nation on earth, they provide quality products and even do us the favour of manipulating their own currency to ensure rock bottom prices.

Give me a competent, competitively priced capitalist over a well meaning "charidy" type any day, at least you know what you're getting.

Corporate charity in the UK has become little more than another bullying, tax efficient arm of the state stuffed full of middle class liberal types and champagne socialists, the lower down that table the better

As percetages of GDP where does the USA stand?

The numbers are expressed in per capita terms. Deflating the dollar numbers in terms of GDP wouldn't change the story by very much.

The difference between US charitable giving and UK is so great that the ranking wouldn't change. At the margin, Switzerland and Ireland would come closer to the US. UK would still look very Scrooge-like.

And where are the French?