Waiting for the great default 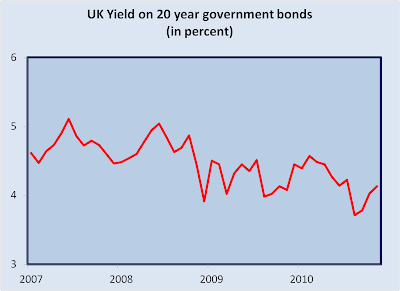 What is the true meaning of this chart?

As the red line illustrates, the yield on a UK twenty-year government bond is around four percent. This means that private investors are prepared to accept a promise that the government will repay a loan in 20 years time in exchange for a four percent return a year.

At the same time, the government promised to pay generous pensions to the public sector. It will also maintain a comprehensive pension system for the rest of us. It has agreed to sustain a social safety net for the unemployed and those suffering from long-term illnesses.

It insists that it will keep a fully comprehensive and free National Health Service. It has also committed to honouring a mountain of PFI agreements under which the private sector built public sector infrastructure in return for long-term service contracts.

I could go on, but the key point is that previous governments have promised away decades of tax revenues.

It's impossible to see how all these commitments can be honoured at the same time. The yield on government bonds reveals no such doubts. The UK bond market doesn't appear to be worried by all those years of extravagant promises.

There can be only one way of reconciling that contradiction. Bondholders are convinced that they will be repaid, which means they also believes that the government will renege on all those other commitments. For future generations, there will be no generous pensions, unemployment benefits, or free health services.

I would be interested to know just who takes out a 20 year bond at 4%, a value gross and presumably only 3.2% net for a return much less than real inflation.

My only guess is that the “investors” here are managed pension funds and the like which are bound into taking only the lowest “rated” risks.

So, don’t expect any of these to pay out much either!

Never before has so much public sector information been put in the public domain.

And yet, the net transparency is no better with debt hidden in PFI deals and unfunded pension liabilities.

Inflation is really the friend of the politician in power; especially unacknowledged inflation.

So yes, Anon@03:42, you will get your pension though it remains to be seen what you will buy your second pint of milk with, for the week.

Unfortunately, most public sector pensions are index linked, so it's those of us in the private sector who'll get shaftes.