UK Economy - Should I sell or hold out? 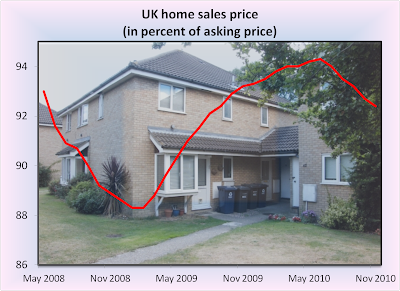 "Should I sell or hold out for more" - this is the terrible dilemma facing anyone trying to sell something.

The chart above reeks of seller angst. In the immediate post-crisis period, sellers were desperate. Prices were collapsing, credit was tight, and the economy was tumbling into the longest recession this side of the second world war.  Settlement prices fell from 93 percent of the asking price to 88 percent.  On average, sellers were offering a 12 percent discount on estate agent window prices.

By the middle of 2009, sellers started to calm down and slowly the ratio of settlement to asking price began to increase. Unsurprisingly, this coincided with a recovery in prices.

But what is happening now? Since the summer, the ratio has started to slip south.  Is this something seasonal, or is the housing market starting to weaken again?

Housing is a need of man and is something that goes from north to south. In terms of importance, Michael Geffrard believes that tough times in terms of financial happens in relation to season. It is like a hoarding period for some during summer, while the rest takes this opportunity to spend money and invest. Better thing to do is to keep tract of the changes and try to find good deals despite the crisis.