Scotland - why have you become so naughty? 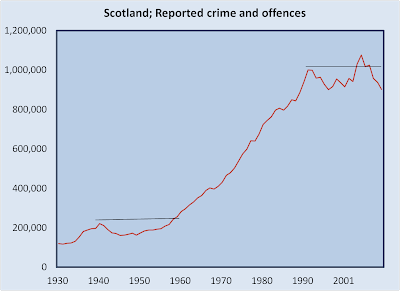 Sociologists hate talking about long term crime statistics. This is because to the casual untrained eye, the numbers strongly suggest that people have become much more evil.   However, that kind of simplistic approach to complex social phenomena runs the risk of marginalising a lot of academics.

Take, for example, Scotland. The quasi-independent statelet publishes crime data going back to the 1930s. Since then, reported crimes and offenses have grown 800 percent. Only UK house prices have grown faster.

The data tells a strange story.  Crime peaked in 1938, and fell with the onset of the war.  Afterwards, it remained broadly flat until the early 1960s.  Then, a diabolic wave of criminality began to wash over the land.  Crime began to rise exponentially, reaching over a million incidents in the early 1990s.

Then things got really weird.  After nearly thirty years of smooth steady increases, the numbers started to jump around erratically.  One year, Scotland would be good, and crime would fall.  The year after, it would return to its odious criminal ways.

Over the last five or so years, Scotland has been overwhelmed by a flood of righteousness; crime is on the way down, although it has some way to go before it returns to the pre-1960s levels.

So, what is behind the shocking rise in naughtiness in Scotland. Remember, in secular Britain there is no such thing as evil people, only evil institutions.

So based on various highly informed discussions with academics, here are my top ten explanations for the rise in criminality.   If I missed any theories, then please let me know.

1.  Population growth - True, there are 15 percent more people living in Scotland than in the 1950s; but that leaves 785 percent of the increase unexplained.

2.  Increasing wealth - Scotland is richer, and there are more things to steal.

3.  More Police - This is a criminal version of Say's Law.  Supply creates its own demand. The supply of police increases, therefore the demand for their services also increases. Since the primary activity of the police is recording crime, the rate is bound to go up.

4.  Insurance claims - More people have insured their goods.  When they get stolen, they are required to inform the police.

5.  The telephone - It is now easier to report crime.  There is no need to go to the police station. Instead, you get on the blower, call 999, and the police come to you.

6.  Better reporting - The police now have computers, printers and Internet connections.  It is quicker to file a report and therefore more crime is reported.  On a related vein, the Police in the past had an incentive to report crime, since the higher the crime rate, the greater the amount of over-time.

7.  Drugs - If only society legalized puff, then people would buy their spliffs at the corner shop rather than breaking in, robbing the till and paying a bloke down the pub.

9.  Cheaper alcohol - Drink makes people daft. The price of beer is down, people drink more and therefore and they commit more crime.

10.  TV crime shows have broadened the horizons of criminals.  It has provided a valuable source of new ideas, allowing innovation and technical progress within the crime creation industry.

Alternatively, you might go for a decidedly nonacademic and unsociological explanation, pointing to declining morality, family break-down and the remorseless rise of an unemployable underclass.

Criminals commit crime. We have more of them today.

I think I could explain that graph pretty well.

Crime was originally low because people in those days didn't have access to cheap easy transport, people are far less likely to steal from or attack their own community.

Crime stats rose pre War, partly due to better access to transport but imo very probably mainly due to better policing. (although without looking up the history of police numbers in scotland, can't say for sure)

During the War, its no supprise that crime falls.
Firstly there is a stronger feeling of community, and secondly most crime is usually commited by young men many of which were now under the control of the army.

After the war we still had some difficult years of rationing. But after that in the late 50's and during the 60's there was the rapid increase in wealth.
Which meant there was more stuff to steal, and that most people had access to cars,vans,motorbikes etc, so they could travel away from their local community to commit the crimes.

Rapid increases during the late 70's and 80's.
As opposite to the war years, there were a lot of young men out of work and with a chip on their shoulder.

Leveling off around 1990 when Micheal Howard was adopting the prison works policy.
Not saying I agree with it, and crime was still a lot higher than it used to be so..

During the 90's and 00's the stats were rigged and so you can't really take the graph at face value. Thats why it appears inconsistent.


So to sum up, the main very important factor I think you didn't mention is transport.
In 1900 many people didn't move out of the village they were born in, and were related to many of the locals. Very different enviroment from now.

You say "9. Cheaper alcohol"
are you sure? i haven't done the research but I thought it was much more heavily taxed these days and much more expensive than it used to be?
Back in the day, on the farm, many of the locals used to make their own home brews. They drank a lot.

Agree with above about transport. Also the ability to get about quickly means you can rob someone and sell the goddies hundreds of miles away in a few hours making linking of events very hard.
The loss of the extended family with family members now scattered around the UK/globe also reduces restraint on behaviour.