Running out of credit 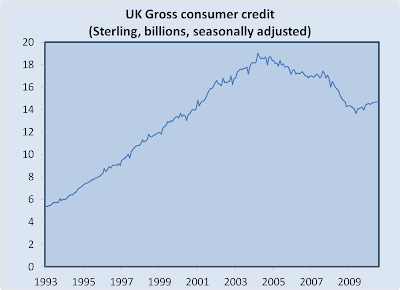 In the aftermath of the financial crisis, consumer credit was regularly offered as one of the prime reasons behind the downfall of UK banks. UK consumers were encouraged to go on a plastic-fueled shopping spree that ultimately created a nation of debt-serfs, who couldn't repay the banks.

The story, however, was only partly true. Yes, consumers were crushed by high levels of debt, but no, the Banks hadn't been pushing individuals to over use their credits.

UK banks had become wary of consumer credit long before the credit crunch. Gross consumer lending peaked around seven years ago. Since then, banks have been quietly reducing the flows of new lending.

Banks engineered this contraction of credit by massively hiking interest rates on credit cards. You would have to be either mad or desperate to run a balance on card.

With default rates rising, banks had become wary of overextended maxed out consumers. Home equity loans and remortgaging, where consumers used their homes as collatoral, seemed a much safer proposition.

Ironically, the credit crunch has prompted banks to reverse their previous policy of reducing their exposure to consumers. For the last 18 months or so, gross consumer lending has been rising.

Interesting - it isn't what I would have expected.