A primer in US healthcare

In 1984, Three quarters of Americans had health insurance. The private sector covered the bulk of these people.  Medicare; a federal health insurance system, provided coverage for retirees.

By 2007 , this coverage had fallen to two thirds. In other words, one American in ten had lost their access to health insurance. Since Medicare coverage was growing, private provision was declining dramatically. 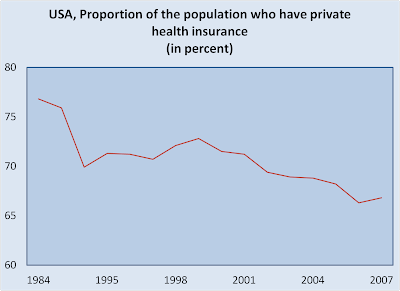 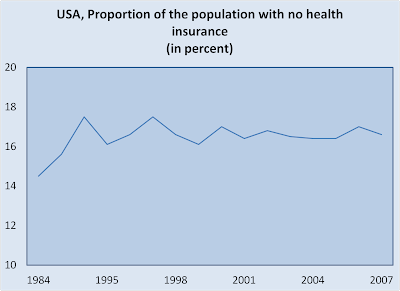 The proportion of Americans covered by the public health care system - Medicaid - is up by almost 10 percentage points.  Medicaid provides health care for families with low incomes and resources. It is a means tested program that is jointly funded by the state and federal governments, and is managed by the states. 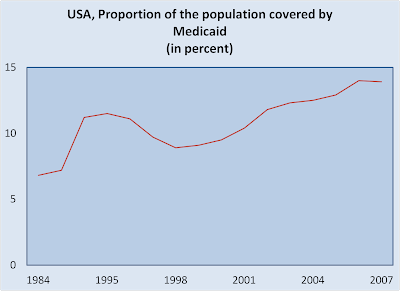 Rising expenditure on Medicaid and Medicare is putting severe pressure on public sector budgets. Overall, the US spends about 16 percent of GDP on health care. Public spending accounts around a half of that number.

Although government programs accounts for half of all expenditure, it actually only provides coverage for directly for 28 percent of the population, who are basically the very poor and the old.

Here is the kicker; health care costs for these groups can only increase. The reason is due to the lifecycle dynamics of health care.

For the vast majority of people, health care costs follow a standard pattern.  For three score and ten years, they are healthy, and have little need of doctors.  As we approach the end of their lives, people contract an ailment that will eventually kill them.  At this point, individual health care costs explode.

The poor, however, follow a slightly different pattern.  Due to variety of poor lifestyle choices, they tend to be ill with chronic diseases over longer periods.  The poor, it is sad to say, require more health care than the middle classes.

With population ageing and a deeply entrenched and growing underclass, the US government finds itself forking out ever increasing amounts on health care.

The US health care system is simply unsustainable. Yet with each reform initiative, it moves closer to the thing that most Americans want to avoid; a fully public system.

The uninsured get their treatments free by turning up at A & E, so that more and more hospitals flirt with ruin. It's extraordinary that Obama opted for "health care reform" that treats a few symptoms but doesn't seem to deal with the underlying problems.

and susbsidising those poor health choices by fining the healthy is an even worse idea.

Hi everyone! I'm from London but am living in Berlin at the moment.
Gotta love this site!