Government bond yields - should we worry? 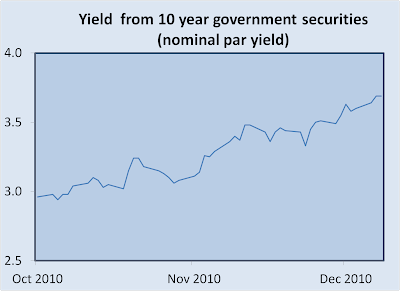 Since early October, the yield on 10 year UK government bonds has crept up 73 basis points. That is equivalent to three typical hikes of the Bank of England's bank rate.

Should we worry? Have financial markets finally realized that the government may have difficulties in repaying the huge amounts of debt it has issued since the financial crisis began?

There are at three reasons for taking a calm and measured approach to rising bond yields:
Overall, these are plausible arguments.  Nevertheless, the monetary policy committee seem to be behind the curve.  Their unwillingness to raise rates has increased perceptions that the inflation rate in the UK may start to pick up.  Recent inflation data underlines this threat. The Bank of England's survey on inflation expectations, released earlier this week, confirms that people are expecting higher inflation in the future.

If inflation were to pick up further, then yields would begin to pick up extremely rapidly.  Financing new government debt will become more expensive. If yields increase dramatically, then the government's fiscal reduction strategy may be in jeopardy.  There would also be negative effects on private consumption and investment.

An early hike in the bank rate would go a long way to reducing these concerns.  It would send a signal that the MPC will tackle any inflationary pressures.  It would also signal that the UK economy has started to take the first tentative steps towards the exit in terms of the financial crisis.

Unfortunately, the MPC have one eye on the large rollover problems that UK banks have to face next year and 2012.  You see, it is always about the banks.  The UK economy would benefit from a rate hike, but that banks would be squeezed.

In any choice between the interests of financiers and and the rest of us, the financiers always seem to win.

Strange, I would have put you down as a bond vigilante.

The western economies are still in trouble. Their debt load is very high compared to their GDP. They are still not trying to curb the debt load very seriously. Job growth is very weak and buying 70% from third world countries and not that much export to balance the the trade. Western nations are growing backwards and emerging economies are growing with surpluses.