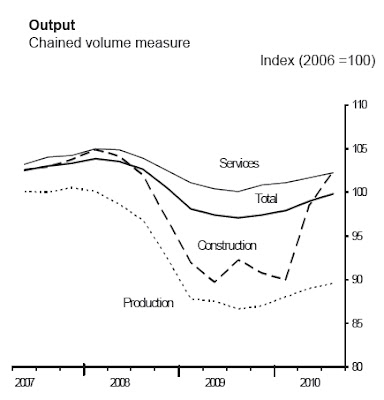 The UK economy isn't recovering as fast as initially thought. The ONS revised GDP figures for the third quarter downwards. Previously it had reported a growth rate of 0.8 percent. Now, the ONS thinks that the economy grew by 0.7 percent.

However, the composition of growth is the real story.  It is rather lopsided. As the chart above illustrates, construction is booming. It is doing all the heavy lifting in terms of pushing GDP upwards. Moreover, it has exceeded the levels recorded in 2006. Why construction should have picked up so suddenly is a bit of mystery to me.

Is the construction the backwash from all those state projects from 2008-2010 and those private ones that were already pipelined to start and with finance in place. So where is the finance coming from?