Come back MEW, the UK economy needs you. 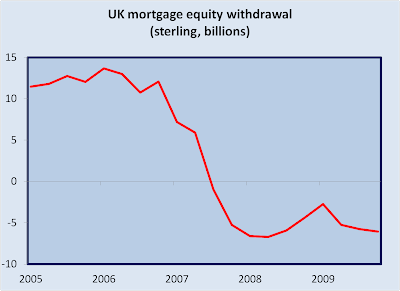 The great engine of the British economy has slipped into reverse. Before the financial crisis, homeowners were pulling out about £12 billion a quarter in home equity loans.  They used this cash to fuel a massive consumption boom that kept the economy growing at around 3 percent.  Since the summer of 2008, homeowners have been paying down their loans by around £6 billion a quarter.  So far, homeowners have paid off around £50 billion.

In terms of their economic impact, these numbers are very large.  In the third quarter of 2010, these home equity repayments amounted to about 2.4 percent of post-tax personal income.  Prior to the crisis, home equity withdrawals were  equivalent to about 6-7 percent.  In pure cash terms, this represents a net turn-around of £20 billion  - almost 10 percent of post tax income.

This isn't how it is supposed to be.  The Bank of England cut interest rates to discourage savings, and make it cheaper to homeowners to borrow money so that they could continue spending.  So what went wrong?  At least three things didn't go according to the script:

Look at the UK's population pyramid on the US Census Bureau, then compare it to Japan mid 1990's.

Old folk don't borrow money, Brits just really want to get the deeds out of the bank vault before they hit 60.

Do you have a link? Steven

I thought you would praise paying off mortgage debt for 10 straight quarters rather than calling it dismal. You seem to have very mixed messages - normally a negative take on everything, even if that means contradicting another negative post.

In olden days you were prevented (by law I think?) from doing equity withdrawal. We once applied to increase the loan to pay for an extension and all sorts of questions were asked, this was in the early 80s BTW.

But on topic, if we have had a economy growing by virtue of loans on an asset that has doubtful value then of course it will all end in tears.

We repaid ours because the interest rate on the loans was 6 times the rate paid on our deposits with no end in sight. We are glad. It doesn't take long for all that interest you have been giving to your lender to pile up in the joint account. I might say that despite it probably being financially not very efficient, it is a great feeling to be free of debt.

I thnk that the british economy lies heavyly in the service indurstry,eg banking, and othe forms of trade which are coming to a stand still leaving her stranded and poor.