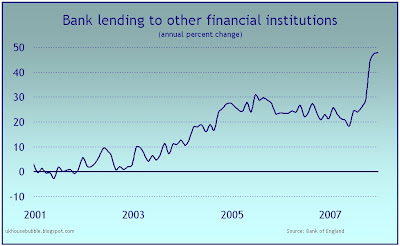 If I could ask Mervyn King just one question, it would be this: "Why is commercial bank lending to OFCs grown so rapidly?"

OFCs are non deposit taking financial companies. Since they don't take deposits they are not regulated like regular high street banks. OFCs make up the famous shadow banking system that we hear about but never see. Credit to these companies has soared in recent months, particularly after the fall of Lehmans.

It is true that companies and households are finding it increasingly difficult to find credit. The credit crunch is real. In contrast to the real economy, the shadow banking system - the OFCs - has been flooded with credit. Currently, bank lending to other financial institutions is up almost 50 percent year-on-year. Since March last year, this sector has received ₤217 billion in additional lending. Meanwhile, mortgage lending fell by ₤107 billion last year.

I am going to take a wild guess and say that this credit growth is to off-balance sheet subsidiaries of commercial banks. Moreover, they are doing it to cover the collapse of funding sources that followed the breakdown of the mortgage backed securities market.

It all points to the terrible circle of problems besetting the banking system. During the boom years, UK banks used off-balance sheet vehicles that now make up the shadow banking sector to avoid regulatory capital requirements. These institutions were initially funded by non bank investors looking for higher yield and who willing bought up all those structured investment products like mortgage backed securities.

Now these investors have disappeared, and as these products mature, iinvestors want their cash back. These shadow banks are highly illiquid and have to make up interest and principle payments by taking out credits from their mother banks, who created them in the first place and who are mostly retail high street institutions.

As the shadow banking sector finance matures and is repaid, it sucks up potential credit sources for the rest of the economy. Moreover, the mother banks can not stop extending this new money because as soon as the credit flow to the shadow banks stops stops, they will go bust.

But it gets worse, the real economy is now starved of credit, economic growth is contracting, and asset values are collapsing, particularly for real estate. In turn, this undermines collateral values, increases default rates and threatens the very existence of the mother banks on the high street.

Is there a way out of this circle? If I was allowed to ask Mervyn two questions, that would be my second one.

Our banks are insolvent. It's time to rescue the bits that must be rescued (£50k per depositor, the payments sytems, the ATMs) and let the rest go bankrupt. I accept that it might be wise to introduce a new, accelerated bankruptcy method for any company with a banking licence, but bankruptcy it will have to be, because otherwise they'll bankrupt the sovereign state, which really would be disater.

Agreed, it must be time to let it all go. The first little piggy's bank of straw is about to be blown away anyway.

{layman}I think this scares the shit out of me. Should it? {/layman}

Barclays - the last of the mohicans

Well done Alice, should get a few more hits today. Have been watching TMM for a while and this one popped up today.

Could 207 billion be an indication of the amount of write-downs by UK banks?
And if mortgage lending fell then why is there such a need for banks to lend to themselves?

All the money to the OFC's is money into the derivative beast hungry mouth...burp! :)

The way out of this circle was meant to be the very way of the market, natural selection.

The bancrupt die and the strong survive, prudence is rewarded and the rebuilding is made from the solid prudence of the survivors.

Too big to fail trumps this however, and as you described leaves us paying money into off balance sheet lossmaking enterprises forever more.

There are two ways out I see:

1. These banks and their off balance sheet SIV's are allowed to fail from lack of taxpayer credit or

2. The government will run out of money and the taxpayers and the banks will fail together.

Either way this circle has no longterm viability.

Why do you say "sucks up potential credit sources" and "credit flow" as though we were on hard money?
Banking is a balance sheet exercise. There is no limit. What is stopping bank's lending at the moment is purely the risk of default. That is all. Currently asset prices are dropping and there is a high risk of default, their interest rate is mandated below the risk... so they can't lend.
The risk of lending on a house includes the fact that probably they have another 40% left to fall, so should you default, then the bank will only be able to recover 60% of the loan.
If you covered the banks default risk by depositing 40% of the value of the asset, covering them, then you would have absolutely no problem getting a loan. You could get one from any bank because you have covered them for their default risk.
The credit crunch is because of defaults. I wish you would take this on board Alice, if all the borrowers paid back their money then what kind of bank crisis do you think it would be? Obviously there wouldn't be one.
However, as far as your point that banks are lending money to themselves through the shadow banking system. Great point. But our own government is using the population's savings to guarantee, the population's savings, also a circle.
What conclusion can you draw?