Lord Truscott, Peer of the Realm 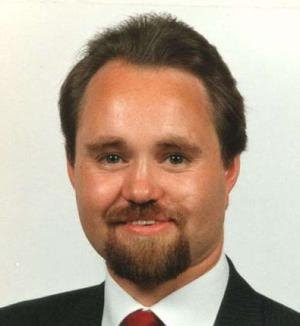 Out of my sight! Thou dost infect mine eyes.

Traitorous dog you mean,string him up.

He looks like the little boy who stuck in his thumb and pulled out a plum.

And the removal of hereditory peers ... what was all that about then ?

The true villain of the piece is Tony Blair - quite likely to be President Tony Blair ... Well he certainly has the luck of the Devil, does he not ???

I believe it may have been Mitch himself, in Another Place today, who used the formula:

I think he looks like a teddy bear who's had his faced shaved..

Anon: "And the removal of hereditory peers ... what was all that about then ?"

That's simple. It was about removing the situation where Tony Blair would have to promote six hundred of his subscribers to the Lords to give him a chance to control Parliament. Getting rid of the hereditary peers, means he only had to promote thirty or so.

The true villain, yes Blair is, but lets not forget Gordon Brown, our *SELF* appointed prime minister! Lets keep him in our prayers.

He reminds me of one of those Ewoks in Star Wars.

Tony Blair's ya man. Brown's ... brown and out ! Blair is the Caesar in waiting.

Excellent manoeuvring when faced with adversity - the arch socialist whose default mode is to pounce on failure and to capture populist emotion.

His success is born of his ability to leech off of the failings of others. Therefore plenty of scope within the EU, especially since his open conversion to Catholicism.

Brown would never have got into office without him. And now Brown is doomed to misery - a grey, cadaverous remnant. Blair youthful and invigorated - sated by the blood of our finest youth and the demise of the country he hates.

Pure evil. With the luck of the Devil himself.

He looks as though he's eating a Yorkshire terrier, the barbaric swine.