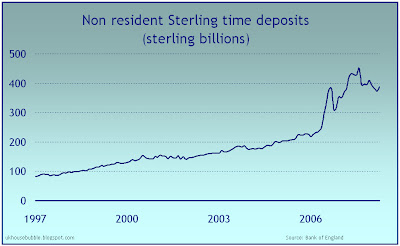 Before the MPC consider cutting rates again, they should stop and think hard the amount of money held in non resident sterling time deposits in UK banks.

There are two things to highlight about this data. First, this money belongs to people who don't actually live here in the UK. This money is here because foreigners want to earn an attractive return. As soon as they see a better deal elsewhere, or if they fear that they might actually lose their money, then this cash is gone.

Second, these accounts are denominated in sterling, which means that before this money leaves these shores, it will be converted into foreign currency. The laws of supply and demand will work their dark magic. A large inflow of unwanted sterling into the foreign exchange market will lead to a collapse in the exchange rate.

The amount of cash held in these accounts is huge. In December 2008, it was an amount equal to 30 percent of UK GDP. The growth of these deposits is even more shocking. Between September 1997 and April 2008, they increased by 450 percent.

So it is a case of cut rates if you dare, because if foreigners pull out this cash, sterling will fall like a stone.

The pound is a high Beta currency.

Could you also post a UK house price chart in Euros/$/Sterling.

Im my opinion Sterling exchange rate will amazingly benefit from the demise of the dollar and so any outflow will be compensated by that inflow.

This is a world recession caused by world banks having financial and cash flow problems. There is no such thing as a safe currency because notes are just promissory.

I do wish you'd have made it clear that money of UK citizens, on which all taxes are paid, can also be held on British, off-shore banks although they live/work abroad.

Some British citizens could not open an account in UK owing to stupid rules which insisted upon utility bills. If you're working and living abroad you normally don't have a home here (not many can afford that lifestyle). So these people were forced to bank with the Isle of Man if they wanted a UK bank account.

Now Kaupthing, Singer and Friedlander have been hauled into the Icelandic banking dispute, many UK (remember they're also full tax payers) citizens are denied their savings.

The way Gordon Brown and his Darling and the Isle of Man FSC have handled this matter is nothing short of criminal.

You also get money of UK resident parked in other currencies too so the reverse could happen. Although based on the current policies of excess spending it probably won't be attractive to park your money in a currency where policy makes are trying to devalue their currency out of trouble.

All fiat currency sytems in history faced an eventual death. That is now on-going. Gold (and silver) is flying because it is the only safe haven asset, and people are now realising it. Silver will do better than gold. The gold price has been suppressed for years, but the CBs are running out of the necessary to keep the price down. Its all there in www.gata.org/
And by the way, sterling is done for IMO !
Josh

The instability after 2006 is remarkable. Higher UK interest spreads, I suppose.

I should have added this link
http://www.gata.org/node/11
If you go into it you can understand the sale of more than half the UK's gold. It was to keep the gold price down. Blair got a "backhander" in the literal sense when he got a job pouring out the tea once a month for GBP2.5m with JPMorgan Chase Bank, the principal bullion bank in the gold price suppression scheme. What will Gordon get when he retires ?!!!
It is frightening, the 100s of billions (maybe trillions) of under water gold derivatives (from dumping of gold and silver on the physical markets) off the balance sheets of bankrupt banks. C, HSBC, JPM, MS, GS, BAC. A very bad accident waiting to happen maybe very soon !

Perhaps they want sterling to fall like a stone? Perhaps a falling sterling is the best thing for the economy?

Low Sterling is a pay cut for every UK citizen (V the rest of the world), and wages DO need to fall.

It's not all bad.