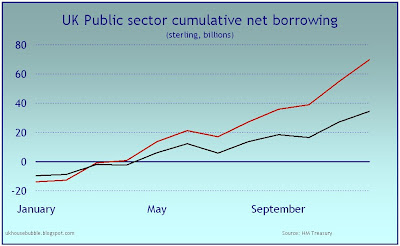 Her Majesty's Government is running a big old fashioned deficit. During the 12 months to December, the public sector borrowed £70 billion; roughly double the amount in 2007.

The chart above illusrates the cumulative monthly borrowing. In effect, it is the month tab, with each month's total being the amount of borrowing up to that point. The chart strongly suggests that things got a lot worse in the autumn, when borrowing really took off.

Running up a £70 billion deficit is bad, but there is worse to come. For fiscal year 2010, which starts in April, HMG intends to borrow something like £120 billion. It will be the largest deficit in the history of this island.

Deficit is relative to GDP and when GDP nose dives we are in trouble.

Alice, Can you label the lines? I am not sure what they represent? thanks. :)

This is going to be a very expensive recession that will sadle us all with high taxes for a long time.