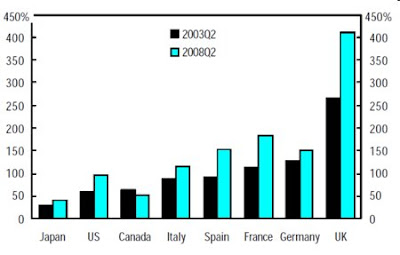 In general, I don't like posting other people's charts. I prefer to do my own, thank you very much. However, there are charts that are so important that they need to be produced in their original format. A recent chart on the Spectator website is such a chart.

The Spectator asks what is the true level of UK external debt, both private and public. The answer is horrifying. Britain owes the rest of the world. It is not 40percent (the level of public sector debt) but 400 percent of GDP. Furthermore, it is the highest in the G7 by some margin.

So what is the plan? Gordon "I saved the world" Brown wants banks to lend more, while the governments runs up an 8 percent of GDP fiscal deficit next year.

Make no mistake, we are on the road to total ruin.

I have no idea where Michael Saunders of Citigroup got those figures from, but it is quite simply not true.

I suspect that Citigroup have sold GBP short or something and are trying to talk it down. Which is fine by me, as it happens, but this sort of talk is borderline illegal.

Does this include the global debt of major multi-nationals listed on the LSE?

Is this net debt? IE does it double count debts from UK companies/individuals to banks and then UK bank debts to foreign banks? If I owe HBOS £100k and they borrowed that money from abroad, does that count as £200K debt or £100K?

If this is a net figure we are really f**ked. Iceland/Zimbabwe here we come.

Most of this external debt is foreign liabilities of the banking sector. There will also be an almost equal amount of foreign assets.

On a net basis, these two things should cancel out. There are, however, risks here, particularly if foreign assets deteriorate.

... or to put it another way, if this were true, then one quarter of GDP would be going in interest payments to abroad. Or £12,000 per working age adult.

and there is a sleight of hand here.

italy for example has an 'announced' 104% GDP deficit. However, it also has unfunded pensions and other off balance sheet activities. If you add these on its numbers go astronomic too.

No counrty reports all its true possible total debt - there is no IFRS 17 for governments.

What this graph shows is our worst nightmare in comparison to everyone elses nicely optimistic thoughts.

and there is a sleight of hand here.

italy for example has an 'announced' 104% GDP deficit. However, it also has unfunded pensions and other off balance sheet activities. If you add these on its numbers go astronomic too.

No counrty reports all its true possible total debt - there is no IFRS 17 for governments.

What this graph shows is our worst nightmare in comparison to everyone elses nicely optimistic thoughts.

It is a good point that the UK is also holding net assets abroad, and that these assets are not offset against the debt.

But what are these assets? Is it not likely that a substantial amount is held in the American mortgage market, and so the value is lost.

In a global recession it is hard to think that our external assets are holding value. So while this chart should not be so dire, it doesn't take a great leap of faith to realise that our debt is already unsustainable, Gordon Brown notwithstanding.

I'm hoping you do an analysis of these numbers. When I read that report I nearly shat myself. Then I calmed down and figured it can't be true (or is true, but not as important as it seems). I'd appreciate detail on why.

BTW, does anyone have a link to a good Brown/Labour image I can put onto a coffee mug as an Xmas present. Perhaps a "I saved the world" type thing?

Please may we have a currency of copper pennies and silver shillings? As in: a real currency!

Don't worry everyone.... "Crash Gordon" who saved the World (from plastic supermarket bags invading the planet) is "steering the UK through these uncharted waters"... into the abyss !
I expect a period of slow decline as Gordon props up his miracle economy.... that will fail and then we go over the edge... terminal collapse of the UK financial system and the £ worthless.

If The Goblin King is "steering the UK through these uncharted waters", it will probably turn out that the Earth is indeed flat and he'll sail us straight over the edge.

Well, I have gone out on a limb and predicted where house prices will end up in the next 2 years.

I do agree with your assessment though Alice. We are in deep doodoo to use a technical term, and "money supply growth" is going to make things worse.

The only possible saving factor for the pound is that the European and American banks are still hiding much of their toxic debts.

When Ukraine, Romania and all the other emerging markets go broke next year, the Eurozone banks are going to be in at least as bad a position as the UK banks.

I recently came across your blog and have been reading along. I thought I would leave my first comment. I don't know what to say except that I have enjoyed reading. Nice blog. I will keep visiting this blog very often.

I bought a cheap Woolworth's advent calender ... only for the kids to find that the windows were boarded up and there was no chocolate left inside.

Four days without a post? I can only assume they got to you...

Alice: talk to us! Are you out there? It's not that bad. We can all talk about it. It's just some silly money/economics/banks/end of the world thing. It's only pretend money.

It's about the 4th time this week I stumble upon that graph. There's now a P.S. on the Spectator page which clarifies it's not net but gross. So Roy is correct and that ratio does not take foreign assets into account. Don't know how much this Michael Saunders of CitiGroup gets paid but clicking on CIA factbook would have produced the same ratio in about 2 minutes by the way.

Still don't quite understand what the significance is in the face of the financial meltdown.

US Financial Freedom, Debt Settlement Company provides the debt relief that will get you back on your feet, with a payment schedule that you can afford.
Imagine what it would be like to be debt free...this is something we have helped people just like you with many, many times.
Why wait to eliminate your debt? Fill out the Information form from site: http://www.usfinancialfreedom.com and let us help make your dreams of being debt free a reality!