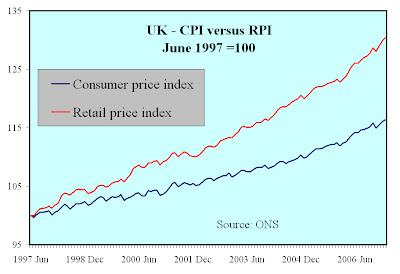 Why have house prices in the UK exploded? The conventional view emphasises demand and supply factors; too many people, seeking to buy too few houses. I don't buy this for a second. I prefer to blame the Bank of England and its irresponsible monetary policies. The Bank created an explosion in credit, which generated a feverish speculative boom in the housing market.

So what is the case against the Bank of England? It starts with a money supply growth. At the moment, the money supply is growing at around 13 percent a year. To prove this point, one only has to go to the Bank of England website, download the data into a spreadsheet, and calculate the growth rate. It is a universal law that if a central bank creates money it will get inflation. The connection between money supply and house prices is straightforward. As the Bank of England created more money, interest rates fell, and pushed mortgage lending rates down. In turn, this encouraged people to take out larger mortgages which put up the price of houses.

However, the Bank of England have a defence, take a look at the consumer price index; where is the evidence of inflation there? Certainly, this index has shown only modest growth over the last 10 years. Typically, it has been below 2% and only recently has it edged above 3%. Since this is the inflation indicator mandated by the government, the Bank of England would like us to think that it has done a good job in containing prices.

However, here is a strange little statistical anomaly (see the chart above). Since the Bank of England gained independence, the retail price index has systematically diverged from the consumer price index, such that today, the retail price index is about 12% higher than its consumer price counterpart. In theory, they should be closely related, since they are supposed to be measuring more or less the same thing - inflation.

For quite some time the retail price index has been flashing red, suggesting that the UK has been suffering from an inflation problem. Since October 2002 the retail price index consistently been above 2 percent. Since May 2004, it has hovered around 3%, and in March 2007 it almost reached 5 percent, the highest level in over 17 years.

In reality, the Bank of England has done a poor job in managing monetary policy since it gained independence. The money supply is growing way too fast; prices are rising far too quickly, and much of this additional credit has found its way into the housing market and generated an unsustainable bubble. Unfortunately, the UK has quite a way to go before this journey is over. However, the road is a well known one. Belatedly, the Bank of England will release that it must choose between the housing market and stable prices. It will reluctantly choose stability, and increase interest rates substantially. House prices will then crash, and a recession will follow.

That is an interesting chart. The divergence is most surprising.