The UK housing crash - it is only a matter of time. 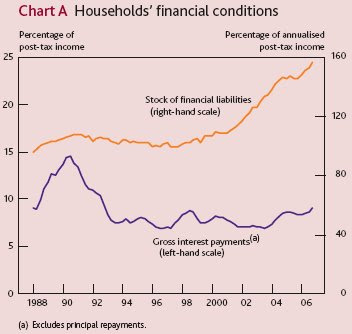 This chart tells an extraordinary story about the current state of the UK economy. On the one hand, we see household indebtedness, as a percentage of post tax income, rising rapidly. This growth in debt starts around 1998, and its growth almost exactly mirrors the housing bubble. However, interest payments, as a proportion of post tax income, have remained broadly constant.

So what has been going on with household balance sheets? As interest rates have fallen, people have more or less maintained the same level of interest payments, but taken on more debt. It is as if they have said to themselves "I can afford to pay around 8 percent of my post-tax income on interest charges and I will take on a level of debt consistent with that interest payment". So long as interest rates are falling, or remain low, this borrowing strategy did not posed any serious financing problems for households.

Today, the average household is about 60 percent more indebted than it was eight years ago. Furthermore, the low interest rates that encouraged this explosion in borrowing are now coming to an end. In the short run, it is possible to roll this debt over, but with ever increasing debt servicing costs. Again, the chart shows that recently, there has been a slight uptick in interest payments as a proportion of post tax income. In the long run, smart banks reduce their exposure to ever more distressed and indebted consumers, while stupid banks suffer from higher default rates. Either way, the accumulation in household indebtedness will begin to slow.

What are interest rates going to do over the next year or so? The answer to this question depends upon how serious the Bank of England is about reducing inflation. As I keep reminding everyone, the UK money supply is growing around 14 percent a year. This is far too fast. There is enormous inflationary pressure already embedded in the UK economy.

The only way the Bank of England can reduce this pressure is by raising interest rates. In other words, the Bank of England must choose between an overvalued housing market or price stability. It can't have both. If it chooses price stability, then we are looking at a repeat of the 1989-91 recession. Again, we can see this story in this chart. Take a look at household interest payments back then. See how they spike. Back then, the Bank of England had to suddenly raise rates to curb inflation. This sudden increase in interest payments forced households to reduce their consumption expenditure and pushed the economy into a crash. What happened to house prices? They tanked.

(I found this chart on the excellent one way pendulum blog. Check it out for a different but complementary account of this chart.)

This is the story of my dad; big house, no pension, and no savings.

Don't know much about the BoE. But the ECB is constitutionally bound to maintain price stability, and it takes into account headline inflation. As far as I know, the Fed focuses on core inflation and takes employment levels into account.

Where does BoE practice fall betwen these two?