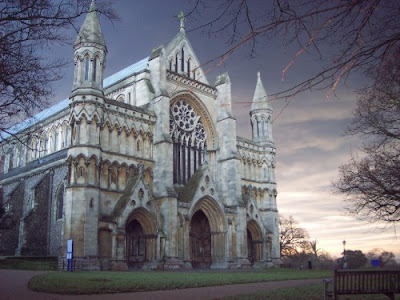 I always thought that London suffered no equals when it came to inflated housing. But the capital must step aside, it is St. Alban's that now claims the title of the "UK's most overvalued city". At least, that the claim the Harlow Citizen is pumping out, citing the Nationwide survey as evidence.

Also, check out the estate agent scaremongering. According, to the Nationwide's Fionnuala Earley, it costs £52 a day if you don't buy a house right now in St. Albans. Well, that has me convinced. I am going to find the nearest estate agent first thing tomorrow, just in case I miss out.

HOUSE PRICES in St Albans are now the most expensive in the UK, a Nationwide survey has revealed. Figures released for 2006 reveal a seven per cent rise in the value of homes, pushing the average price of a property above £300,000 - well beyond the reach of most first time buyers and key workers.

Fionnuala Earley, Nationwide's most senior economist, said: "St Albans is now the most expensive town to buy a house. The average price breached the £300,000 mark in the third quarter of this year and reached £304,872 by the end of the year." Earley added that buyers could expect to see prices rising by a further £52 every day in the coming months.

Chris Cooke, a director at Daniels Estate Agents, London Road, said a combination of top schools, beautiful countryside, big City salaries and a lack of available properties were forcing many buyers off the property ladder.

St. Alban's is such a crap-hole too

Interesting videoclip on the US housing market